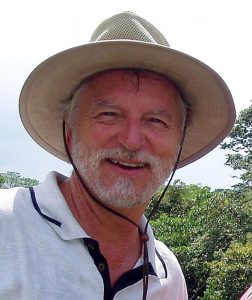 ECI President Eldon Gath was the 2014-2015 Richard H. Jahns Distinguished Lecturer in Applied Geology. The lectureship is awarded jointly by the Environmental and Engineering Geology Division (EEGD) of the Geological Society of America and the Association of Environmental and Engineering Geologists (AEG). The purpose of the lectureship is to promote student awareness of Applied Geology. The Jahns’ Lectureship has been jointly awarded annually since 1988.

Eldon, a consulting engineering geologist, has more than 30 years of experience in the identification, investigation, and remediation of geologic hazards, involving land use planning, environmental assessments, field exploration programs, and presentation of findings. He has particular experience with the evaluation of active faults for construction site planning, the development of seismic safety programs and policies, and is currently engaged in efforts to modernize California’s 40-year old active fault zoning act (Alquist-Priolo Earthquake Fault Zoning Act).

Eldon is a graduate of the University of Minnesota, Institute of Technology, with a BS degree in Geology in 1978. He has been in graduate school ever since; MS program at Cal State LA (1982-1990), PhD program at UC Riverside (1993–1996), PhD program at UC Irvine (1998–2008), but despite getting very close, he has never managed to complete the degree due to his busy consulting responsibilities, professional organization involvement, and travel schedules; or conflicted priorities, if you ask his advisors.

Eldon has received several research grants from the U.S. Geological Survey’s National Earthquake Hazard Research Program, the Southern California Earthquake Center, and the National Science Foundation for earthquake geology research in California, including paleoseismology of the Whittier fault, tectonic development of the San Joaquin Hills, tectonic geomorphology of the Eastern Los Angeles Basin, and the seismic hazards of the Santa Ana Mountains. He served as the geosciences member on a National Research Council panel to develop the research agenda for the NEES program, he served on the LA County Land Development Technical Advisory Committee for a decade, served on the California Board for Engineering, Land Surveyors and Geologists’ Technical Advisory Committee for two years, and has participated multiple times as an Occupational Expert for the US Department of Labor.

Eldon is a frequently invited speaker to local southern California colleges. Since his first professional presentation on the Whittier fault at AGU in 1987, he has given over one hundred presentations before professional, academic, and public groups, and has published dozens of papers on a wide range of geological and professional practice topics, several of which have received awards for outstanding presentations and papers.

In 1995 he was awarded the Aki Award for Outstanding Paper Presentation at the California Academy of Sciences Annual Meeting for Active tectonic structures in the eastern Los Angeles basin, then in 2007 received the Outstanding Presentation Award at the AAPG Annual Meeting for Quaternary geomorphic development and seismic hazards of Orange County, California. Along with coauthors, he has received the 2010 GSA E.B. Burwell Outstanding Paper Award for The Geology of Los Angeles, and the 2012 AEG Claire P. Holdredge Outstanding Paper Award for Paleoseismology of the Pedro Miguel fault, Panama Canal. He served as South Coast Geological Society (SCGS) President in 1987, AEG Southern California Section Chair from 1990-1992, AEG Treasurer, Vice President, and President from 1993-1997, received the AEG Floyd T. Johnston Service Award in 2008, was elected a Fellow by GSA in 2011, and was made an Honorary Member of the SCGS in 2012. He is a member of AEG, GSA, AIPG, AAPG, EERI, IAEG, IAPG, AAAS, AGU, SSA, PDAC, and all local geological societies.

Eldon offered a broad range of talks, including several that focus on the process and methodology of the work that would be suitable to a classroom presentation, as well as several results-oriented science talks suitable for a graduate-level symposium. The talks offered are described below: 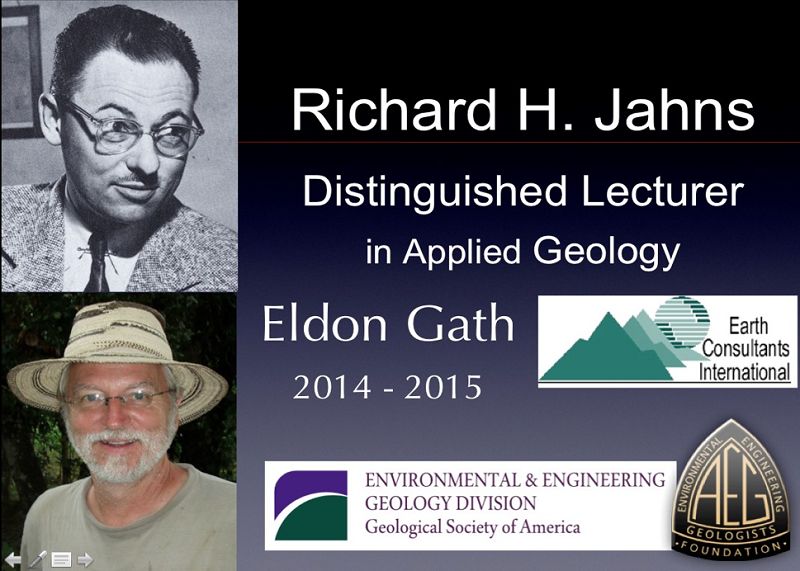 The Santa Ana Mountains:Indenter Tectonics and the Earthquake Hazards of “The OC”: This talk explains the tectonic geomorphic evolution of Orange County (“The OC”) in Southern California over the past one million years. The talk is an analysis of the modern seismic hazards and causal mechanisms for the recent earthquakes, and proposes a new collisional indenter model to explain the interaction of strike-slip and thrust faults in the eastern Los Angeles Basin. The talk concludes with a question as to how the implications for broadly distributed ground deformation, predicted by this model, will affect landuse planning, and how and what engineering geologists will need to do to address this issue. 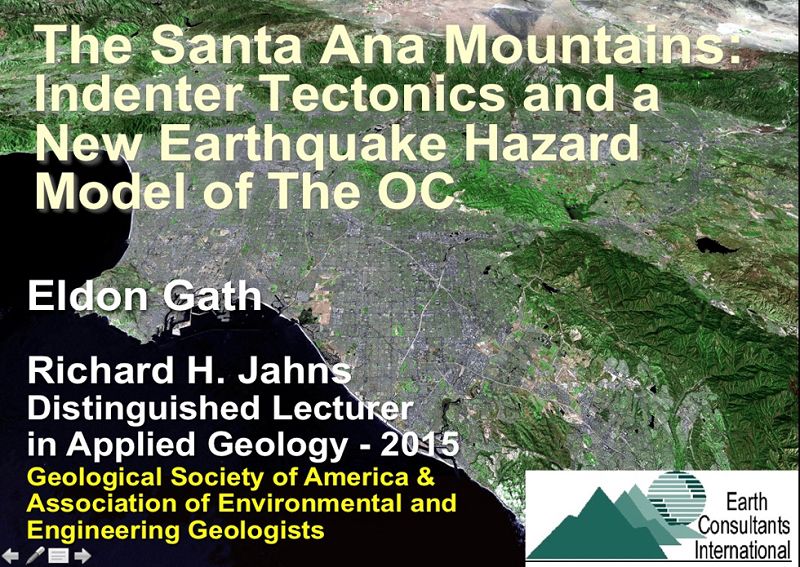 Tectonic Geomorphic and Paleoseismic Investigations for the Panama Canal: This talk summarizes five years of geological exploration in Panama to quantify the fault hazards to the Panama Canal and the Canal Expansion Project, using tectonic geomorphic mapping and analysis, paleoseismic trenching, and seismic hazard analysis. Faults that were investigated include the Gatún, Limón, Azota, Pedro Miguel, Miraflores, and Agua Blanca. The talk illustrates techniques of field reconnaissance, trench site selection, 3-D trenching of strike slip faults, and how to assemble the data into a seismic hazard model. If extra time was available, an overview of the Panama Canal and the Canal Expansion Project were also presented. 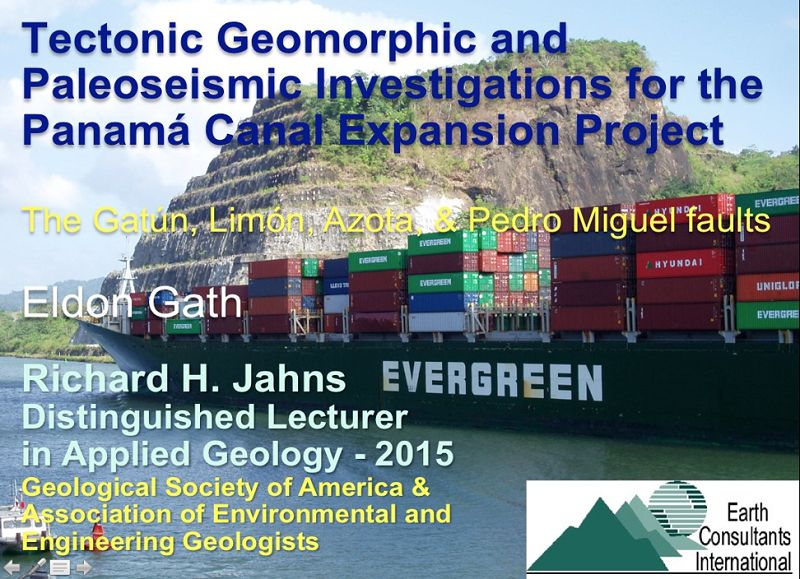 Active Faulting and the Beverly Hills High School: An Unexpected Journey into Geo-Ethics: This talk is oriented towards the ethics of hazard disclosure, using the case of an “Active Fault Map” that had been recently released by a public agency, and which showed multiple active faults through Beverly Hills High School, plus numerous other high-rise buildings in the Century City area of western Los Angeles. The High School immediately undertook a comprehensive fault hazard investigation; the talk details the methodology and findings of that study. The core of the talk also describes how the public release of the fault map was handled, and the on-going consequences of its release. The ethical questions begin, however, when Mr. Gath explains that none of the “active faults” shown on the map had been actually observed, and that no active fault has yet been found in the flurry of geological investigations the map triggered. 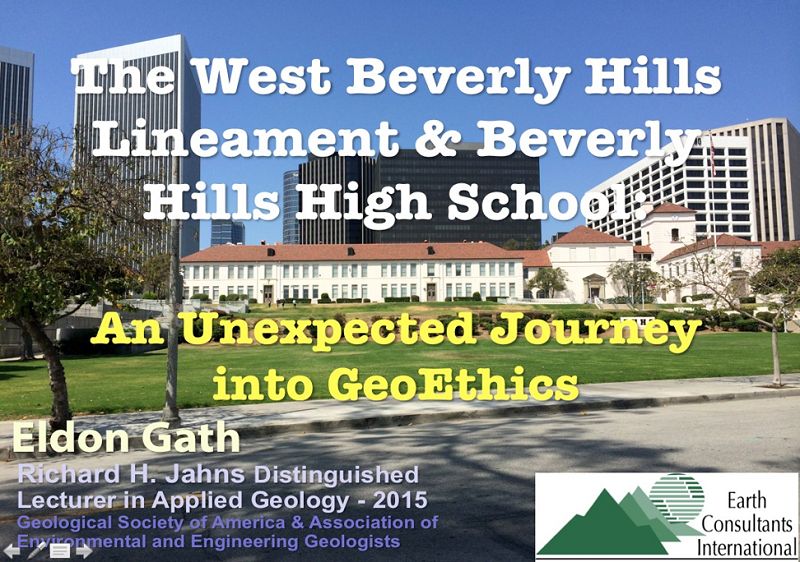 Paleoseismology of the North Panamá Deformed Belt from Uplifted Coral Platforms at Moín and Limón, Costa Rica:  This talk illustrates the value of Quaternary geomorphology to understand the paleoseismic history of a large offshore thrust fault. By recognizing that a coastal-fringing coral reef that was uplifted in a M7.6 1991 earthquake was repeated multiple times on the landscape, it was possible to use the paleo-reefs, and their ages and vertical separation, as proxies for prior paleoseismic events. This talk focuses on the methodology of the investigation, and how its results were used in the Probabilistic Seismic Hazard Assessment calculations for design of a new harbor on the Caribbean coast of Costa Rica. 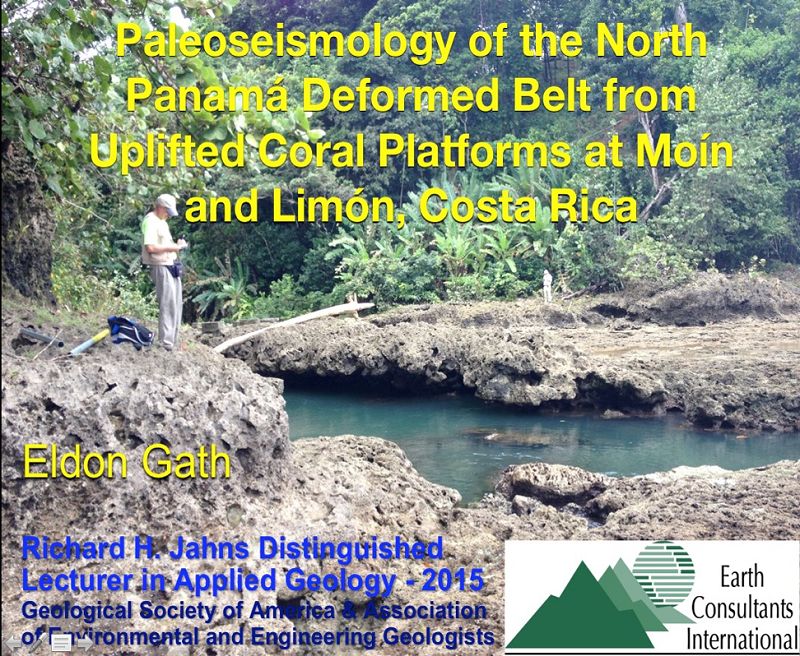 Geological and Geotechnical Investigation into the Causes of a Killer Landslide: This talk is a good introduction to landslides, covering landslide geomorphology, terminology, and ultimate causation by looking at a recent case study. The slide, which resulted in many deaths, serves as an excellent opportunity to understand the factors (geology, environment, and human) that led to its failure. The talk illustrates the geomorphic features characteristic to all landslides, the methodology of how a landslide study is conducted, the various causal forces involved, and how they lead to the final triggering mechanism. 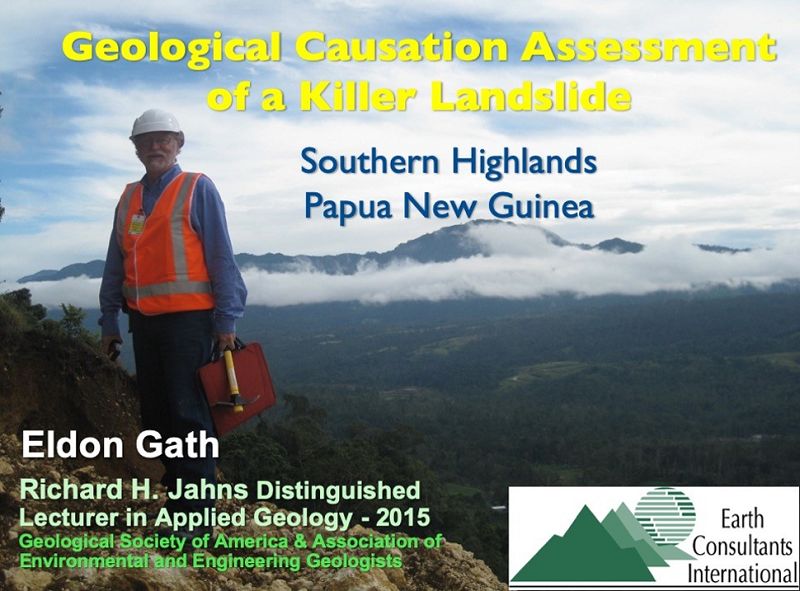 Natural Hazard Identification, Impact Analysis, and Risk Assessment for Community Disaster Mitigation Planning: This talk presents the methodology of hazard map preparation for use by city and county governments for land use planning, hazard mitigation, and loss prevention.  Examples will be shown for several southern California cities and counties, including active fault and seismicity, landslide and slope instability, flooding, wildfire, liquefaction, tsunami, and other types of hazard maps. These maps provide the foundation for all public Safety Elements in California and for Disaster Mitigation Plans nationwide. Illustrating the hazard, communicating how hazard becomes risk, and helping our communities mitigate that risk is a critical skill set for engineering geologists to develop. 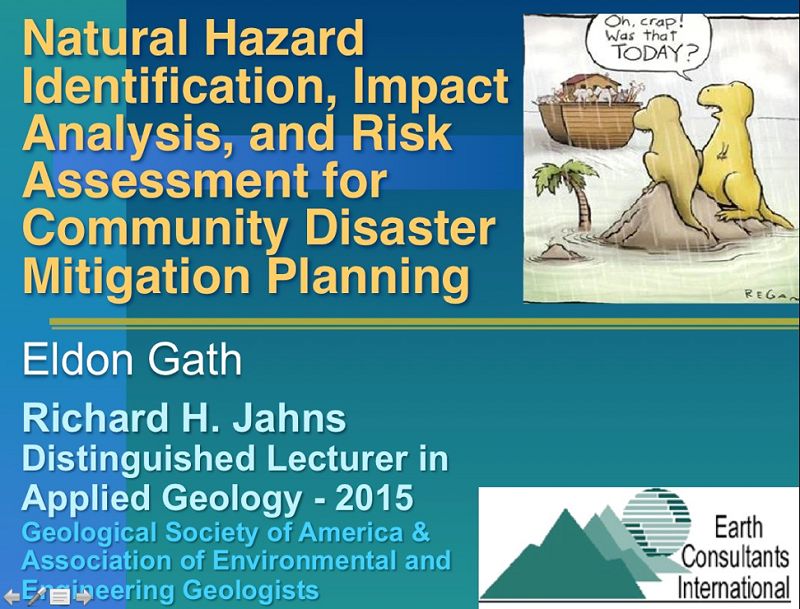 Mitigation of Surface-Fault Rupture: Updating California’s Alquist-Priolo Earthquake Fault Zoning Act for the New Millennium: Following the 1971 Sylmar earthquake, enactment of the California Alquist-Priolo (A-P) “Earthquake Fault Zoning Act” has been an important program to mitigate surface-fault rupture. While the legislative intent to prohibit new structures from being built across future fault rupture hazards was progressive for its time, the A-P has become a 42-year-old law in need of revision and modernization to reflect the four decades of improved knowledge of geologic fault hazards and earthquake engineering of soils and structures. The public, and our profession, is better served by upgrading the A-P for consistency with the risks associated with other natural hazards; fault rupture mitigation be required for faults that are within 500 years of their average recurrence interval, and mitigation can include geotechnical and structural solutions for smaller displacements or avoidance if the offsets are large. 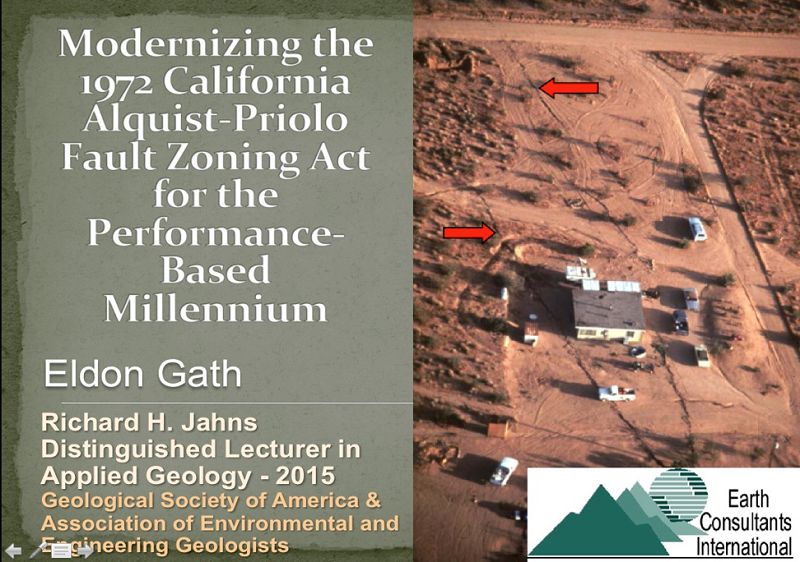 Environmental and Engineering Geology: An Overview of the Profession: This talk presents an overview of the broad scope of the engineering geology profession, based on my personal experience from 35 years as a consulting engineering geologist working in Turkey, Portugal, Costa Rica, Mexico, Papua New Guinea, Panama, the western US, and more to come. Note that I have never worked in a large company or in government, but have frequently worked for them, [and I do not do hazardous waste], so my paradigms are based on only a modest sample set of the various career opportunities out there. But it has been a fun career so far. This talk is fast, shallow, and opinionated – suitable for an informal [think pizza] setting of students interested in what types of projects and jobs are out there, what I think is important academically, how to get in front of the hiring bus, and just an opportunity to talk and answer questions. 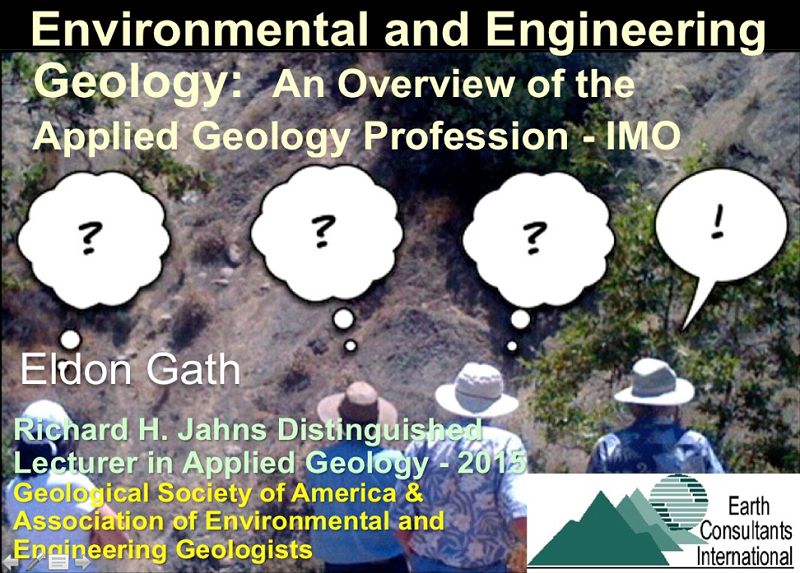 Quantitative Kinematic Investigation of the AD 1621 Pedro Miguel Fault Rupture for Design of the Panama Canal’s Borinquen Dam: This talk focuses on a detailed analysis of the AD 1621 Panamá Viejo earthquake, how the source fault was identified using archeoseismology along the Camino de Cruces (Spanish trail), and how several quantitative 3-D paleoseismic trenching studies of the Pedro Miguel fault were used to quantify the coseismic displacement kinematics of that earthquake for design of a major Canal expansion project dam across the fault. The talk presents a successful case study of the use of tectonic geomorphology, paleoseismology and archeology to advance the awareness of earthquake risk for a globally important infrastructure project – the Panama Canal. Portions of the talk are based upon the paper: Rockwell, T., E. Gath, T. Gonzalez, C. Madden, D. Verdugo, C. Lippencott, T. Dawson, L.A. Owen, M. Fuchs, A. Cadena, P. Williams, E. Weldon, and P. Franceschi, 2010, Neotectonics and Paleoseismology of the Limón and Pedro Miguel faults in Panamá: Earthquake Hazard to the Panama Canal; Bulletin of the Seismological Society of America, Vol. 100, No. 6, pp. 3097-3129, doi: 10.1785/0120090342. [Received the 2012 Claire P. Holdredge Award from the Association of Engineering Geologists for a publication that is judged to be an outstanding contribution to the Engineering Geology profession.]