Earth Consultants International’s experienced and licensed engineering geologists can evaluate and address potential geologic and seismic hazards that could impact your projects.  We specialize in the following services:

This is at the core of what we do best. We use aerial photographs, digital elevation models, LiDAR images, and other remote sensing tools to identify lineaments that are potentially related to earthquake faults. Our team includes excellent geomorphologists that can “read” the landscape and recognize fault-related features such as aligned valleys, deflected and offset streams and ridges, saddles, scarps, and aligned springs and sag ponds. The location of a fault may be confirmed by trenching or by drilling a series of borings across its inferred trace. Depending on the goals of the study and the logistical and geological constraints of the site being investigated, we may 1) define the location and width of the fault across the property, 2) assess whether or not the fault has moved in the Holocene (in California, faults that have moved in the Holocene – the past 11,700 years, are considered active), and 3) obtain data on how often the fault has ruptured the ground surface and the size of the earthquakes that the fault is capable of generating. In California, we often conduct fault investigations in response to the requirements of the Alquist-Priolo Earthquake Fault Zoning Act, and we are experts at doing these studies in densely built, urban environments.

Figures and photos below illustrate an example of a fault study in central Panama that included analysis of digital elevation models, topographic maps and other imagery to identify features characteristic of faulted terrain, such as scarps and offset drainages. The interpreted lineaments were then checked in the field by walking along the inferred fault traces and identifying geomorphic indicators of past fault activity. The photo on the left shows geologists standing on the sides of a small stream or gully that has been offset by the Limón fault (the fault on the bottom-right quadrant of the maps shown below); the fault runs from left to right on the photo, between the two geologists, with the side behind the fault having moved to the right relative to the side in front of the fault (indicating that this fault has a right-lateral strike-slip component).  The fault was subsequently trenched, logged and photographed (log shows an approximately 6-meter (20-ft)-wide fault zone, with the red lines illustrating individual fault splays recognized on the trench wall. Our analysis showed that this fault has experienced at least three surface-rupturing earthquakes in the past 950 to 1,400 years, with the most recent earthquake having occurred less than 400 years ago. For additional information regarding this study conducted as part of the expansion of the Panama Canal, refer to Rockwell et al., 2010. 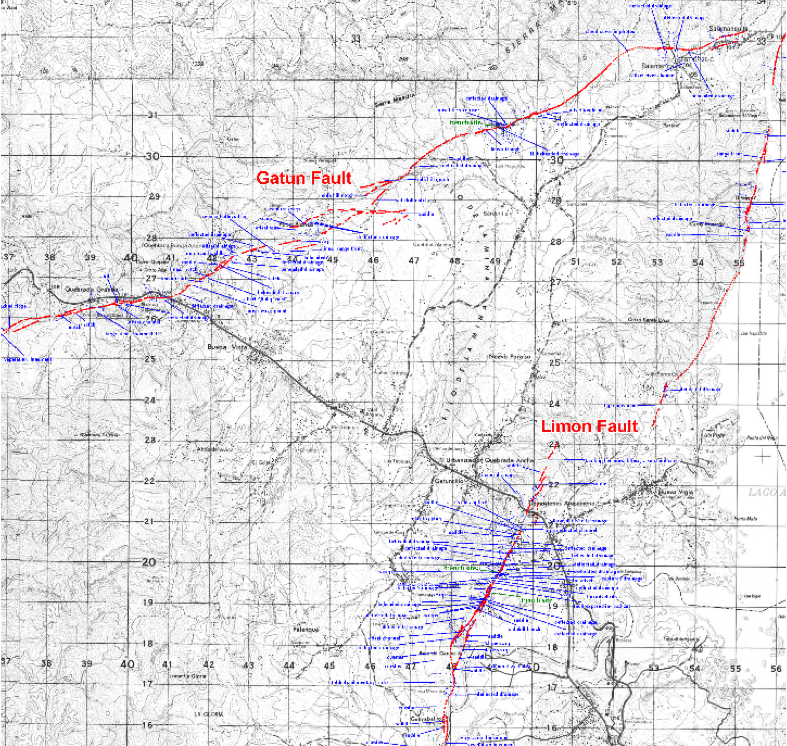 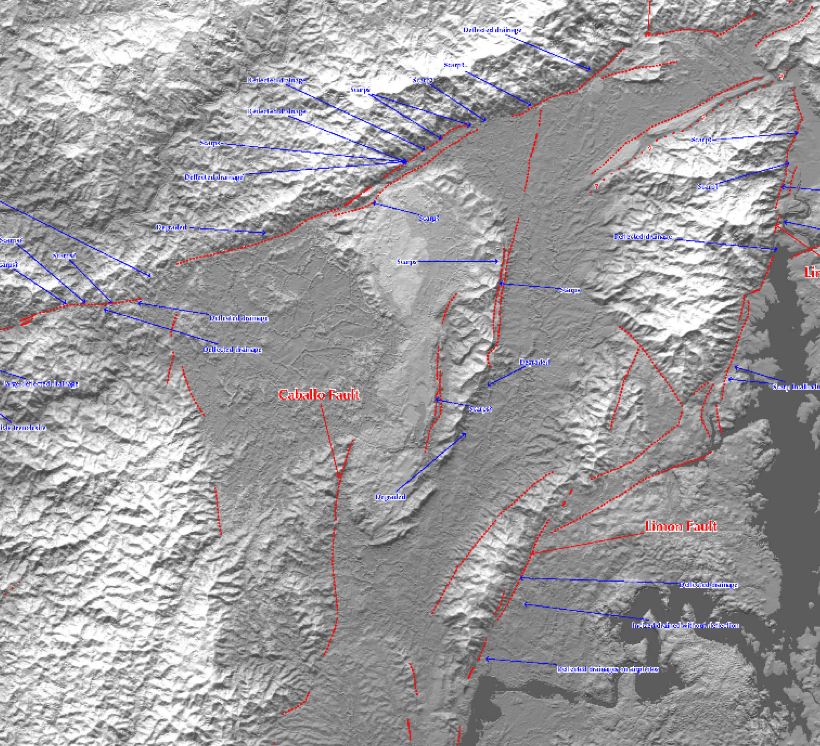 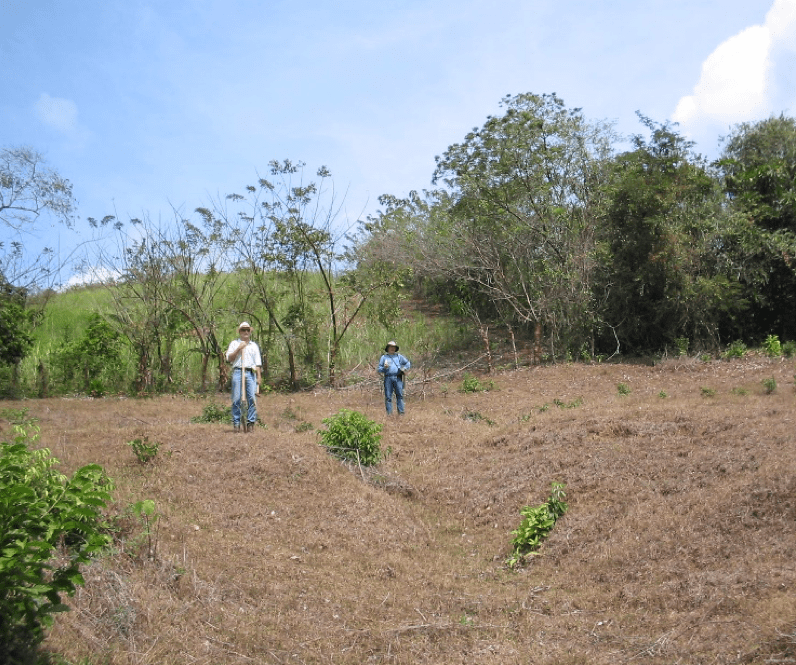 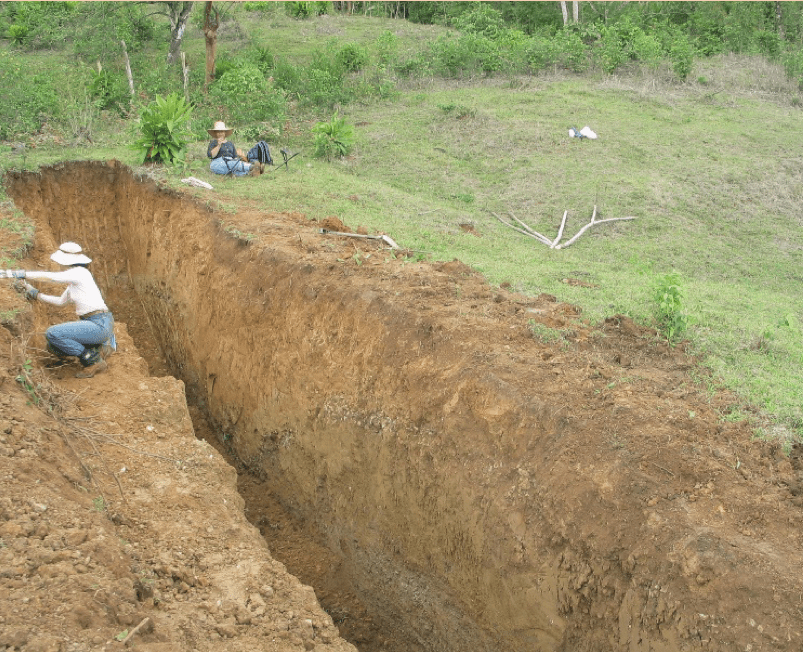 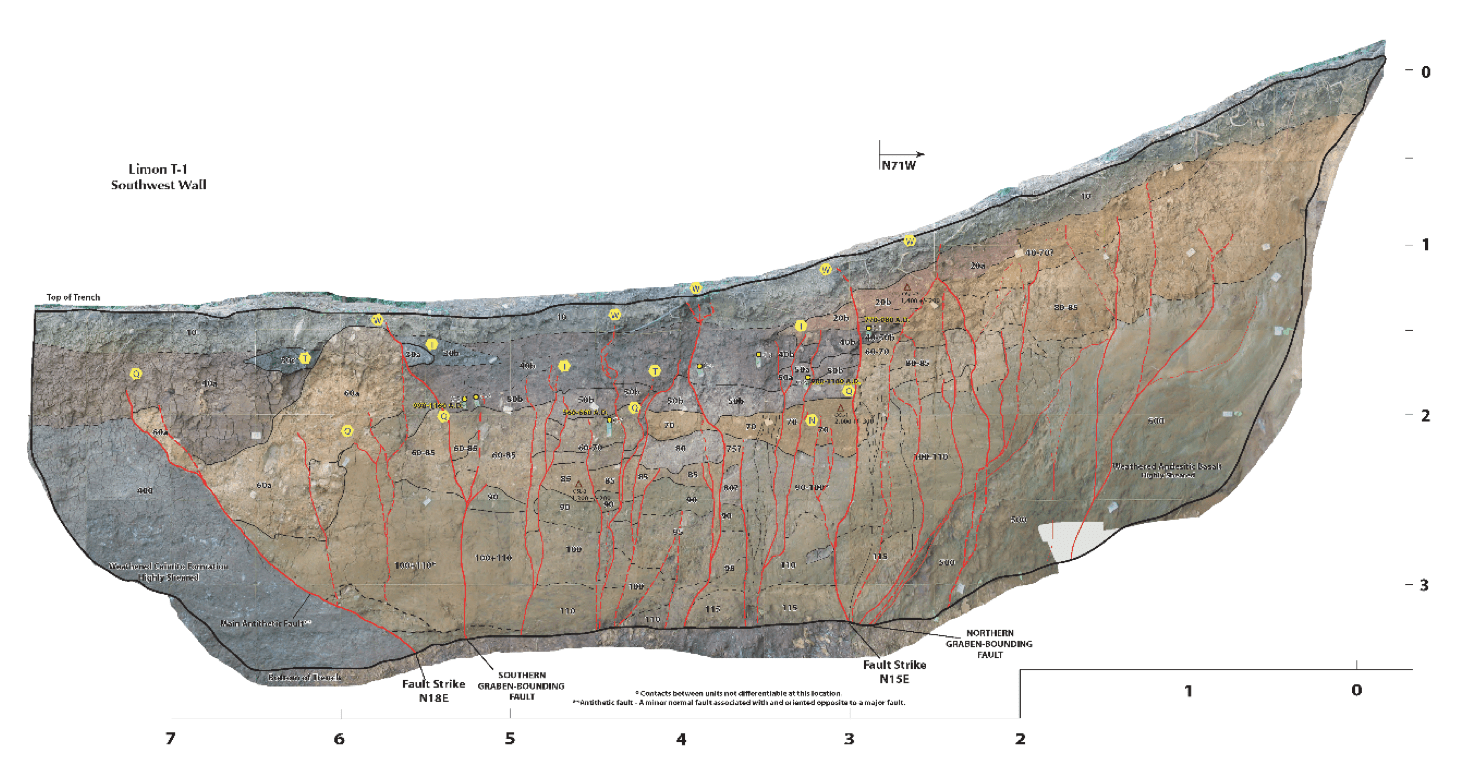 Figures and photos below illustrate our experience in conducting fault trenching studies in intensely developed urban environments like the cities of Los Angeles, West Hollywood, Beverly Hills and Santa Monica (photos show fault trenches that were excavated in vacant lots or parking areas in between high rises). We are also skilled in the collection and interpretation of subsurface data using continuously sampled borings and cone penetration tests (CPTs) for fault studies where trenching is not possible, typically along city streets. The cross-section shows the data from a series of CPTs and two continuously sampled borings in a transect approximately perpendicular to a splay of the Newport-Inglewood fault. Two potential faults (near-vertical red lines) were interpreted from the data. These studies were conducted to satisfy the requirements of the Alquist-Priolo Earthquake Fault Zoning Act and the California Geological Survey’s zoning of the Hollywood, Santa Monica and Newport-Inglewood faults through highly developed areas in Los Angeles County. 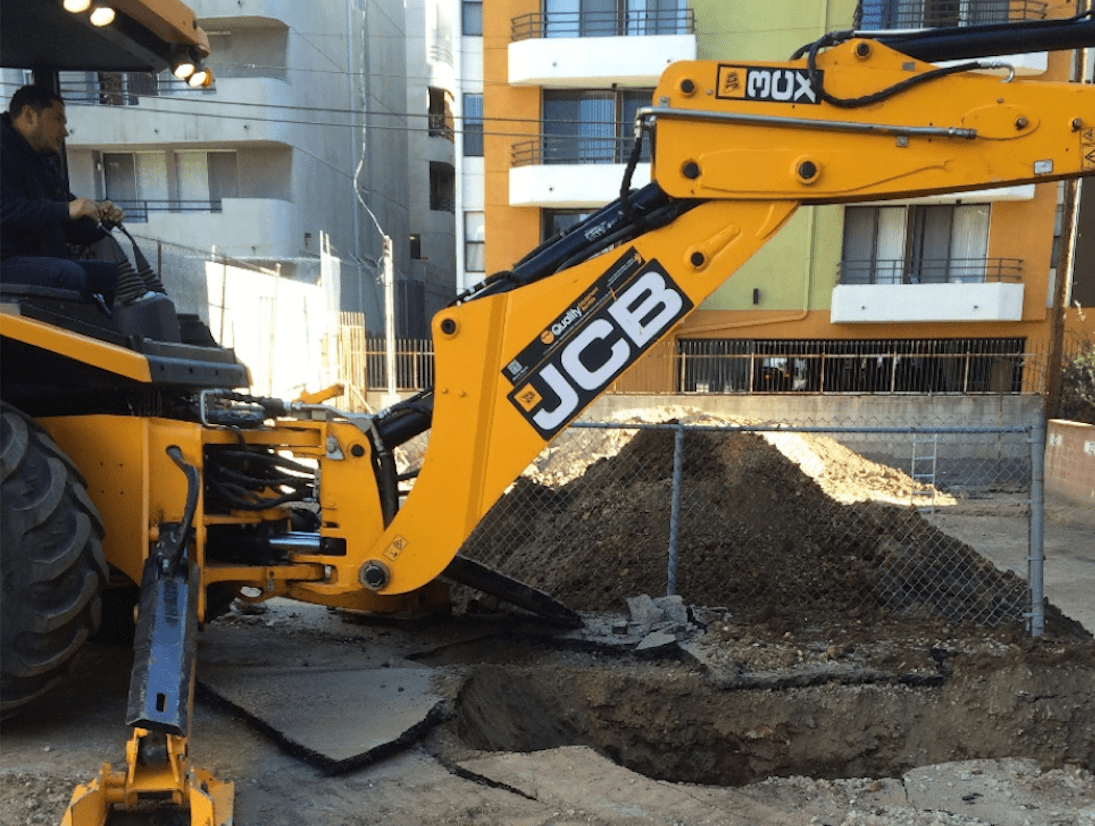 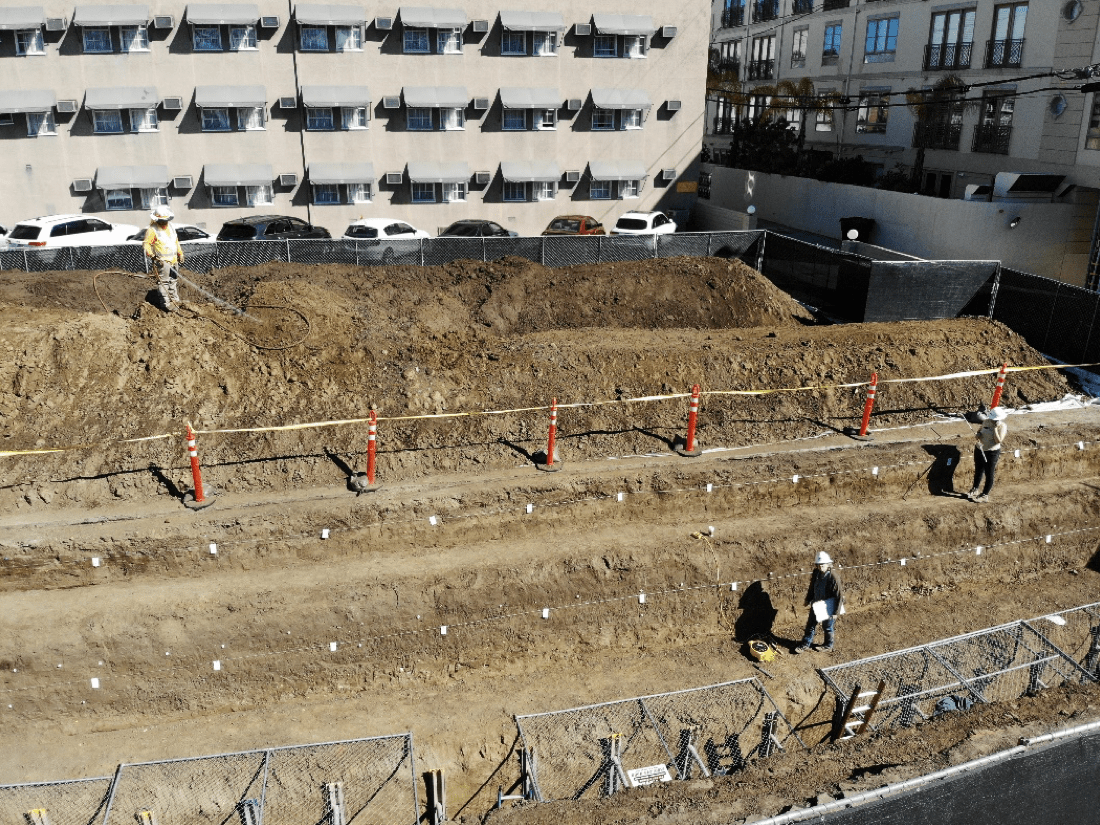 The design of buildings and structures requires input on the expected ground motions (earthquake-induced shaking intensity) that can be expected during the life-time of the project (typically 50 years) or, in the case of a critical facility, 2,500 to 10,000 years. The current Building Code and web-based interactive ground-motion mapping sites are generally used to obtain shaking intensity data for conventional development, but critical facilities typically require a more site-specific approach.

To do this, we compile the seismic and geologic data available for the subject area, including recently issued peer-reviewed publications on the nearby seismic sources (faults) and historical earthquakes, and published and non-published data on the characteristics of the soils under and near the site with an emphasis on the shear wave velocity of the soils and the depth to bedrock. Each fault is characterized as to length, orientation (strike) and dip angle, type of motion (strike-slip, normal, reverse, or combination thereof), thickness of the seismogenic zone, depth to the top of the fault tip, and slip rate. If these data are not available (typically for major engineering works in international locations), we may be retained to conduct a field study using the techniques described above under Fault Location and Characterization Studies, to obtain the necessary information. Uncertainties in the data are considered by creating a logic tree where different potential values for a given input parameter (such as, for example, minimum, average and maximum fault length values) are assigned a weight factor. The earthquake engineer on the project uses these data and the logic tree we developed to calculate the site-specific seismic design ground motions, including response spectra. 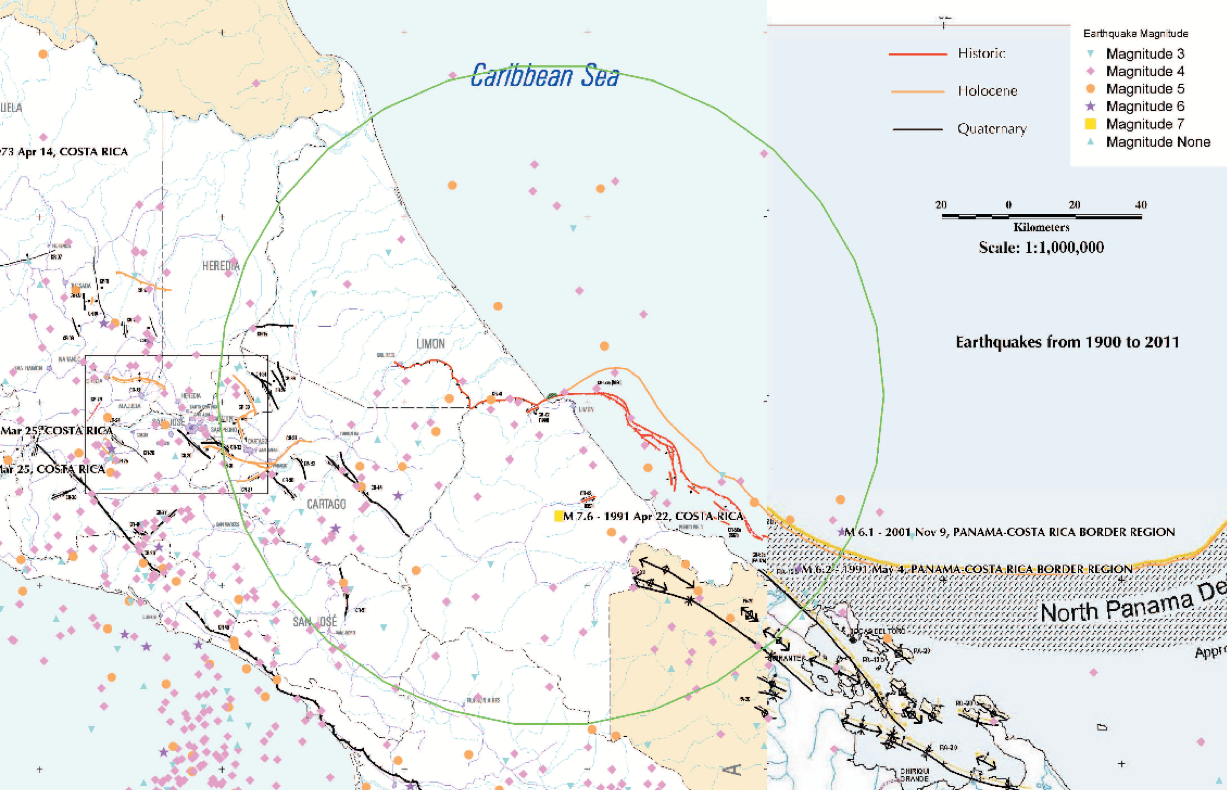 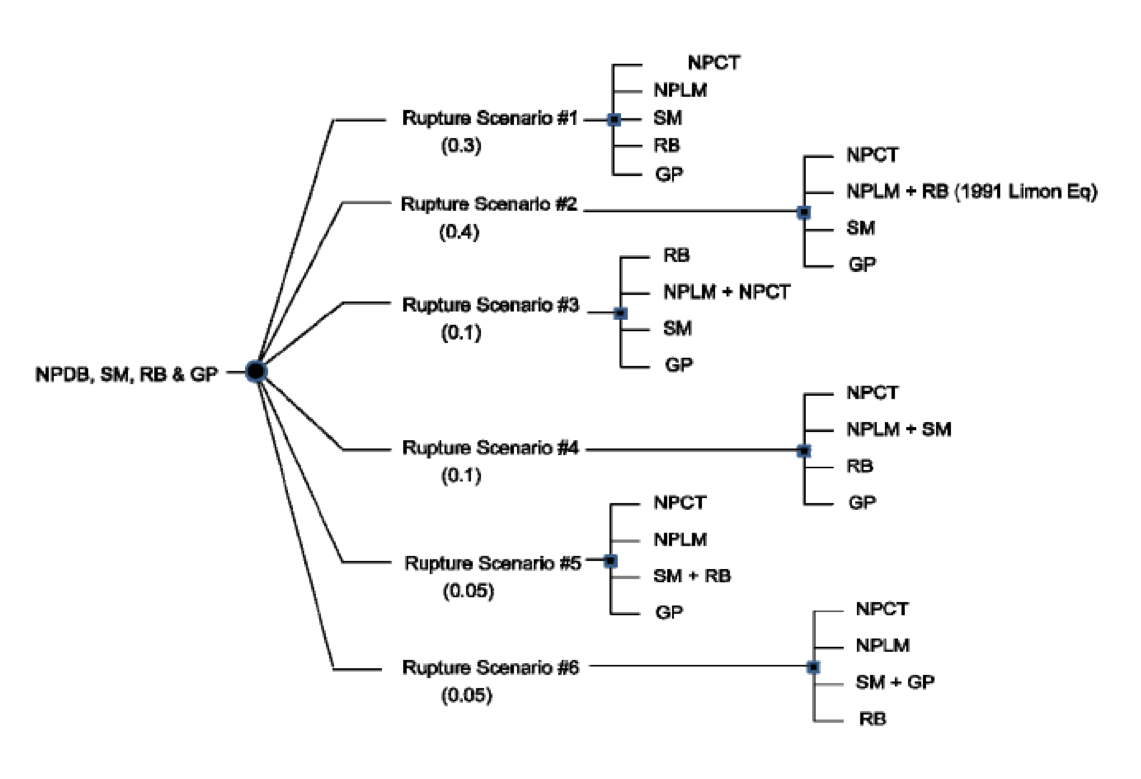 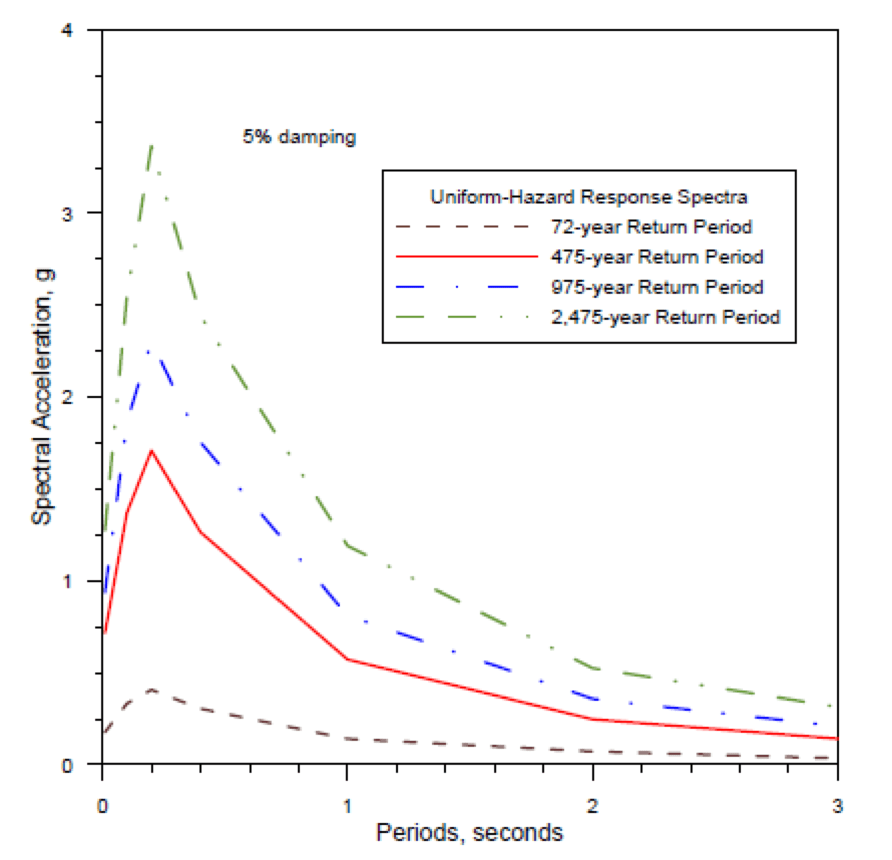 Figures and photos illustrate a seismic hazard characterization study we conducted for a facility on the Caribbean coast of Costa Rica. The faults within 100 kilometers (62 miles) of the site were identified, and their characteristics defined as best as possible, based on a review of published maps and reports, analysis of aerial photographs and digital elevation models, and field survey. Earthquake catalogues and other historical records were reviewed to obtain information on the strongest ground shaking likely to have impacted the site in the past 500 years. A logic tree was developed for the faults closest to the site deemed to pose the greatest hazard to the project. The engineering company (our client) used these data to develop preliminary seismic response spectra for the site. The results indicated that additional data on the North Panama Deformed belt were necessary to better constrain the site’s response to ground shaking. We then conducted a study of the elevated coral reefs along the coastline, with the stepped uplifts interpreted to represent paleo-earthquakes.

We are often retained to conduct simplified seismic risk analyses for corporations interested in determining which of several sites they are considering for a new business or manufacturing location has the lowest seismic risk. These clients include banks, dedicated computer server servicing companies and manufacturing facilities sensitive to small ground deformations or business interruptions due to earthquake shaking or damage. For these studies we review the faults closest to each location, the likelihood each of those faults has to rupture in the not-too-distant future, and the anticipated level of ground shaking at each location. As part of these reviews we typically also assess whether or not the sites are located in areas susceptible to earthquake-induced slope failure or liquefaction.

Slope failures occur in a variety of sizes and forms, from large deep landslides to slumps, and surficial failures to mud and debris flows. Even if currently stable, large landslides can be reactivated by weather, construction activities, or human-induced water accumulation. Slope failures can occur on natural or man-made slopes. Landslides are movements of relatively large land masses, either as a nearly intact bedrock blocks, or as jumbled mixes of bedrock blocks, fragments, debris, and soils. Landslides are typically identified by their distinctive landscape morphology, which most often includes a steep, arcuate headscarp, undulating or relatively flat-topped head, and a blocked or diverted drainage at the toe. Surficial failures can include fairly benign but potentially annoying and expensive slope creep, soil slips and earth flows, and potentially dangerous and destructive debris flows or mudslides. Slope failures are often triggered by other natural hazards, such as earthquake-induced shaking, intense or persistent rainstorm events, and fire-flood sequences, or human activities like poor grading practices, overwatering, and poor maintenance of slopes and water drains and pipes. Marginally stable mountain slopes may deform into unique landforms referred to as “sackungen,” characterized by linear troughs, upslope-facing scarps and closed depressions near the top of ridges and other mountainous terrain.

Our engineering geologists have extensive experience in the identification and characterization of landslides, sackungen and other slope failures using aerial images and other remote sensing methods, and field mapping. The three-dimensional geometry of landslides may be evaluated by drilling through the landslide mass to identify the rupture surface(s), using either small-diameter borings or the down-hole logging of bucket augers, or trenching along the landslide headscarp, lateral margins, or the toe of the slide at the base. The results of these studies are then used by the design team to evaluate the mitigation measures most appropriate to each case. 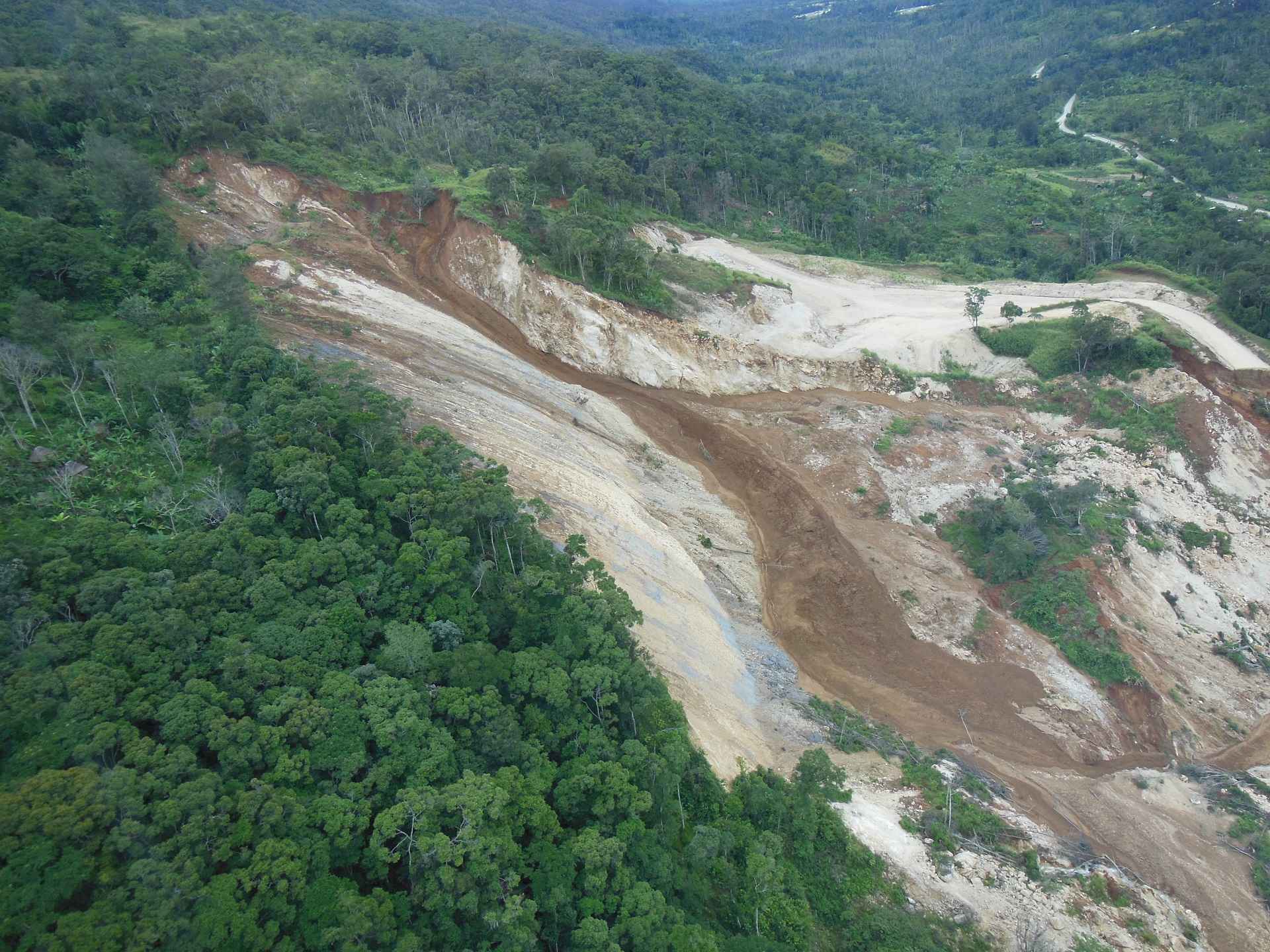 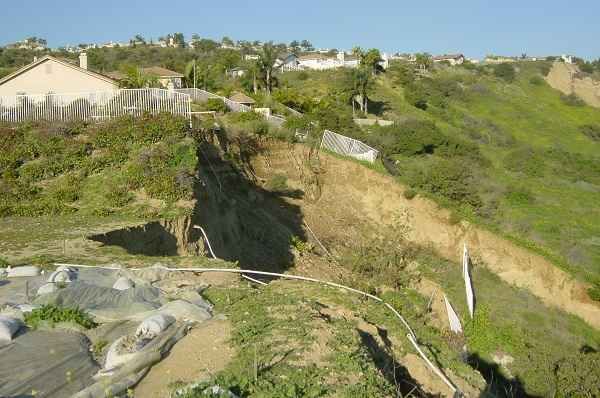 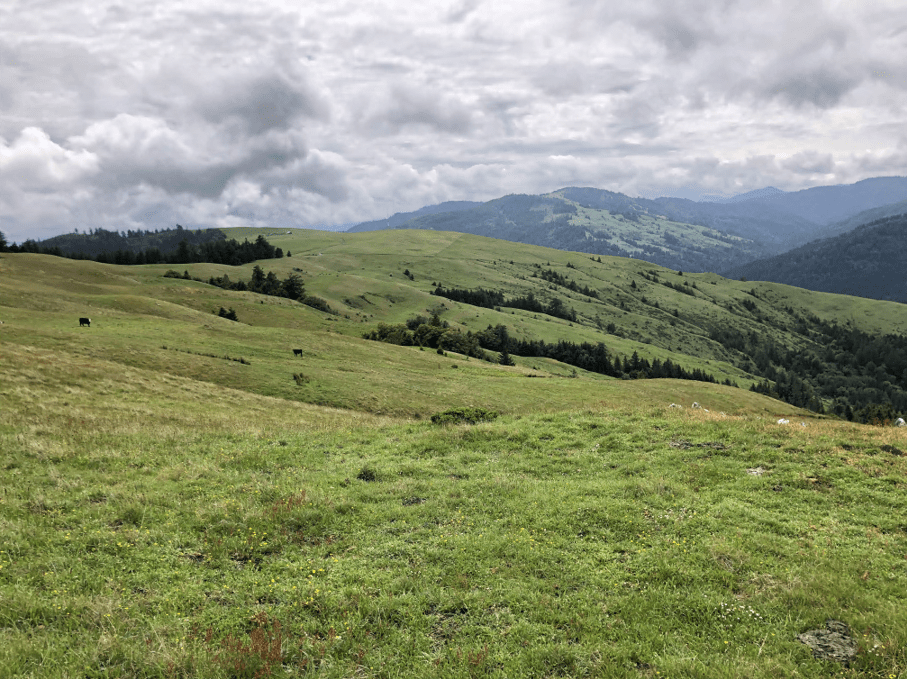 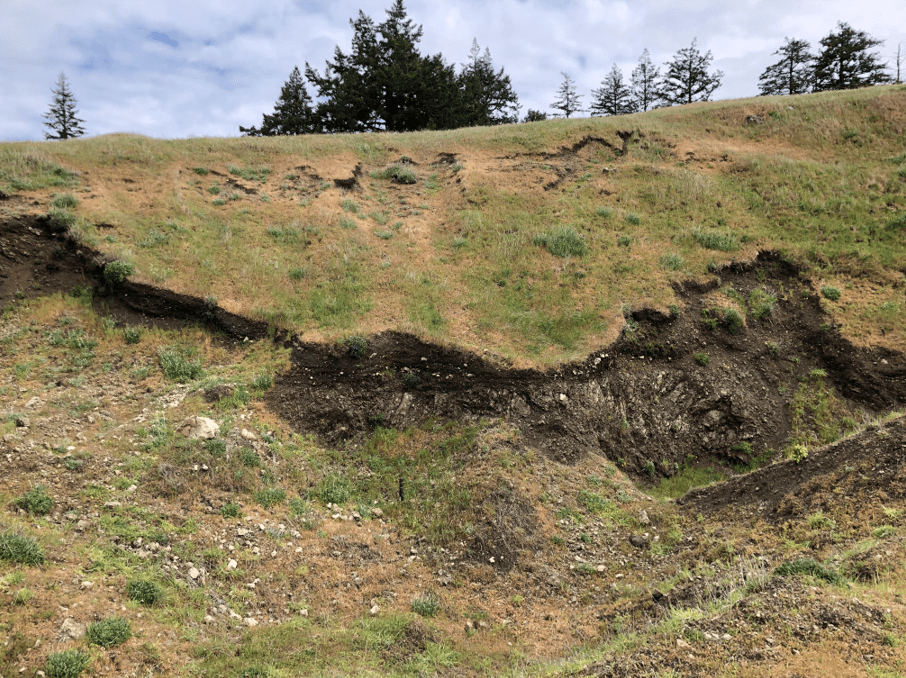 Liquefaction is a geologic process that occurs in loose, saturated sediments in the presence of moderate to strong ground shaking and results in various types of ground failure. Liquefaction can cause structural distress or failure due to settlement of the ground, loss of bearing capacity of the soils supporting the building or structure, and the buoyant rise of buried structures such as underground storage tanks. Excess hydrostatic pressure caused by strong ground shaking can also result in the formation of sand boils or mud spouts, and the seepage of water through ground cracks. Liquefaction of bedded or layered sediments that are exposed along a cut slope or free face can result in the lateral displacement of large blocks of soil downslope or down-dip, damaging pipelines, utilities, roads, canals and other structures.

Earth Consultants International’s geologists use geologic maps, geotechnical borehole data, groundwater records, and knowledge of the seismic susceptibility of the region to evaluate whether or not an area is susceptible to liquefaction. We often conduct these studies as part of geological feasibility studies for proposed or existing pipelines and other infrastructure, and natural hazard assessments for cities and counties (Safety Elements of the General Plan or Local Hazard Mitigation Plans).

Map below showing areas with a high susceptibility to liquefaction (dark blue zone) in the city of Coachella, California, based on analysis of sediment types, historical depth to groundwater, and proximity to the San Andreas fault.  Map was prepared as part of the City’s Safety Element. 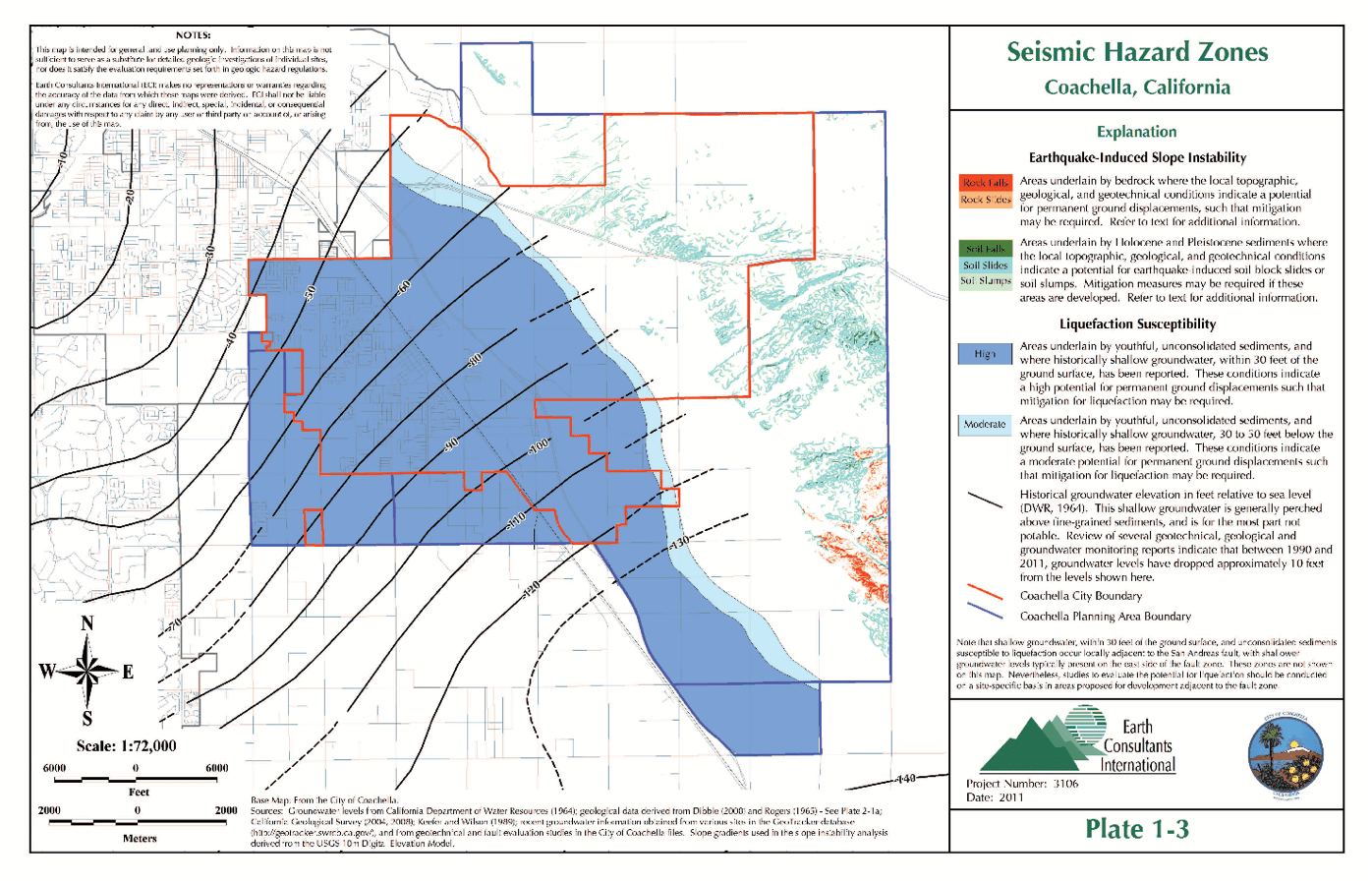 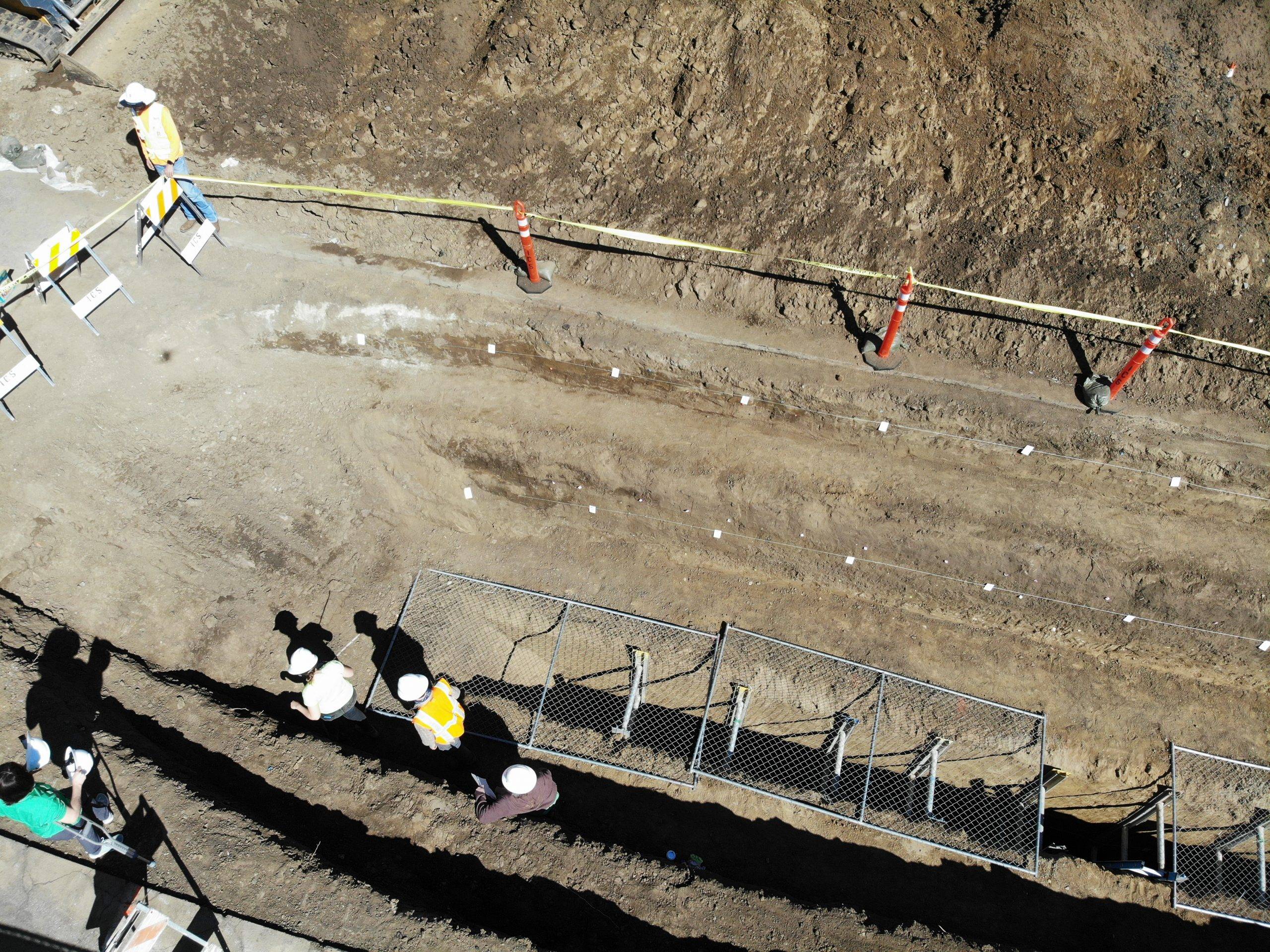 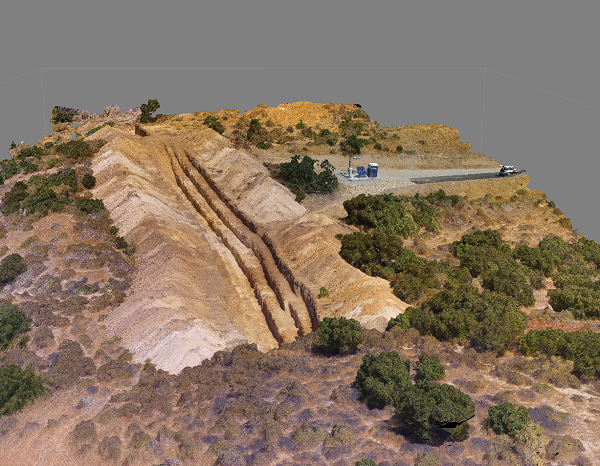 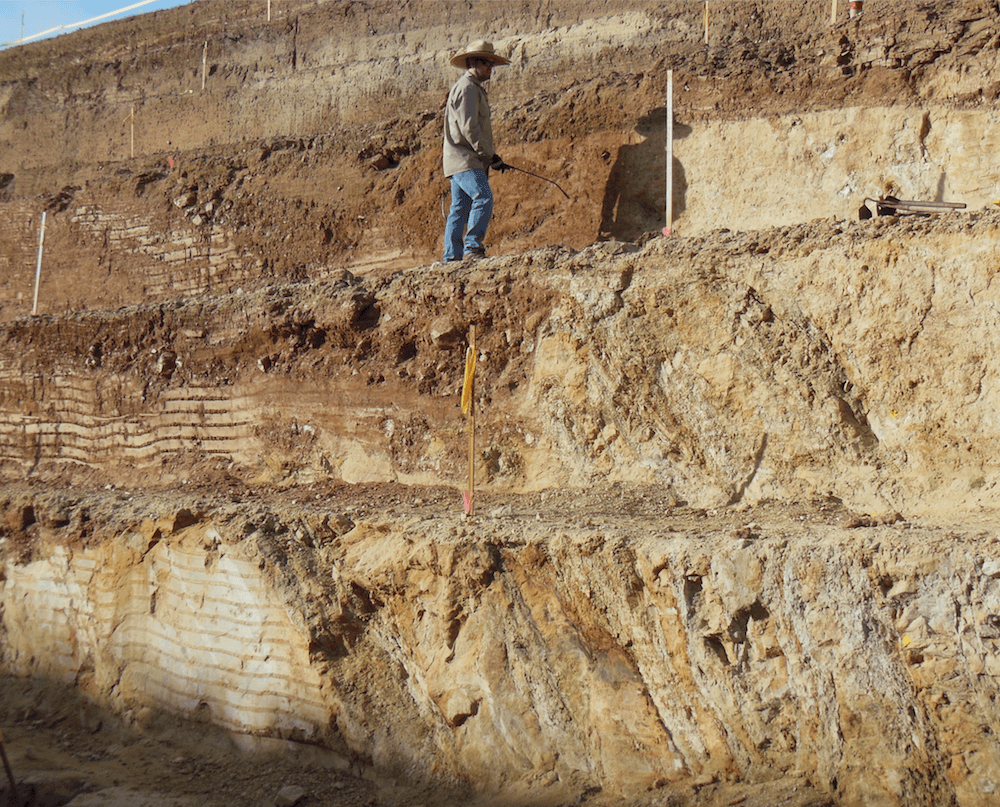