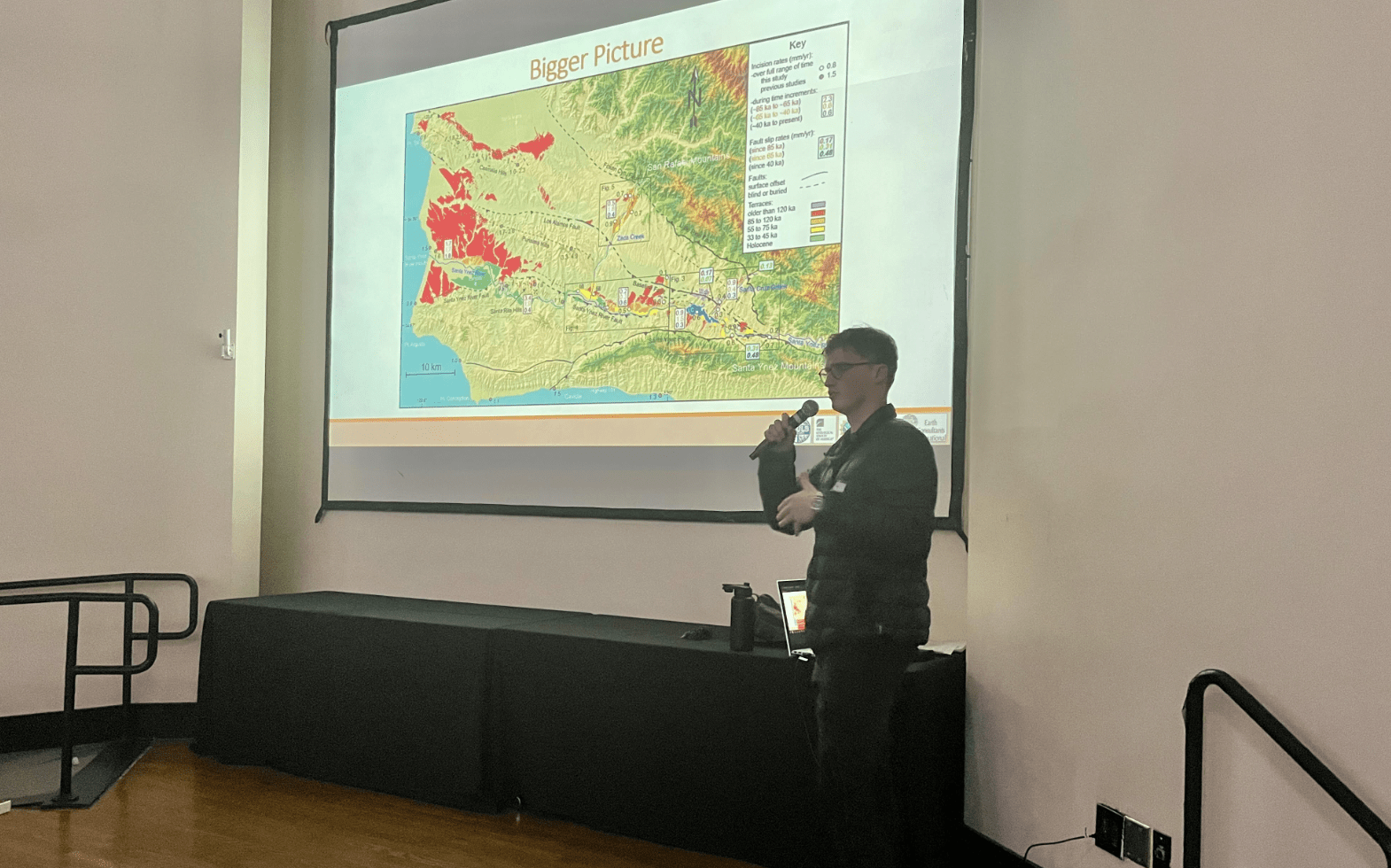 ECI geologist Clay Kelty gave talk to the South Coast Geological Society presenting his research on the deformation and topographic development along the Santa Ynez River Fault in California. 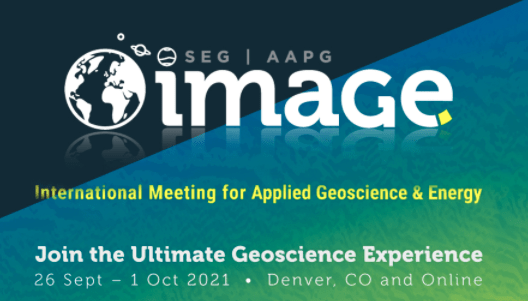 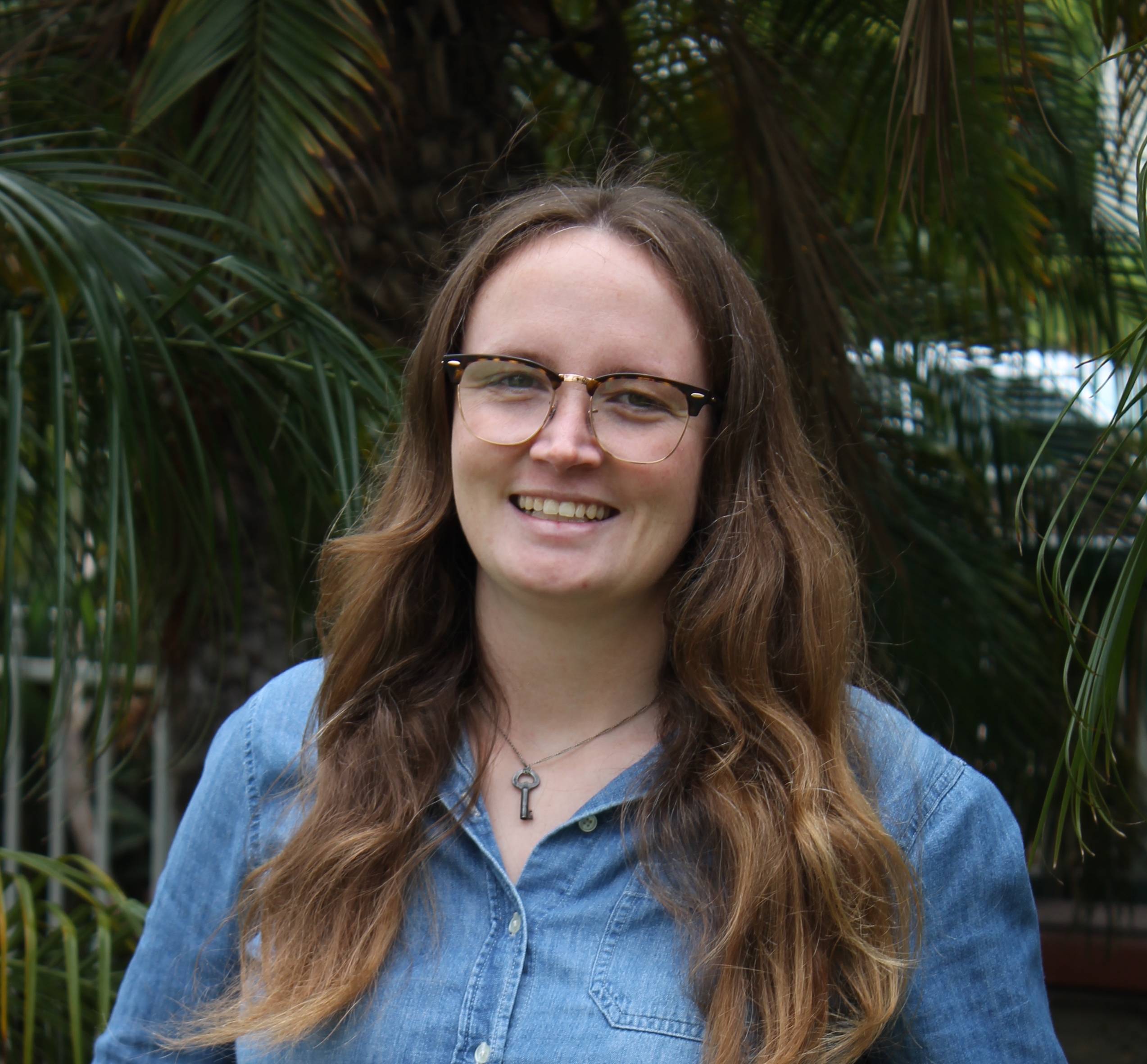 ECI’s Taylor Bogdanovich has served as president of the South Coast Geological Society in 2022. Besides hosting the monthly meetings, Taylor has organized a field trip to the Lake Havasu area. 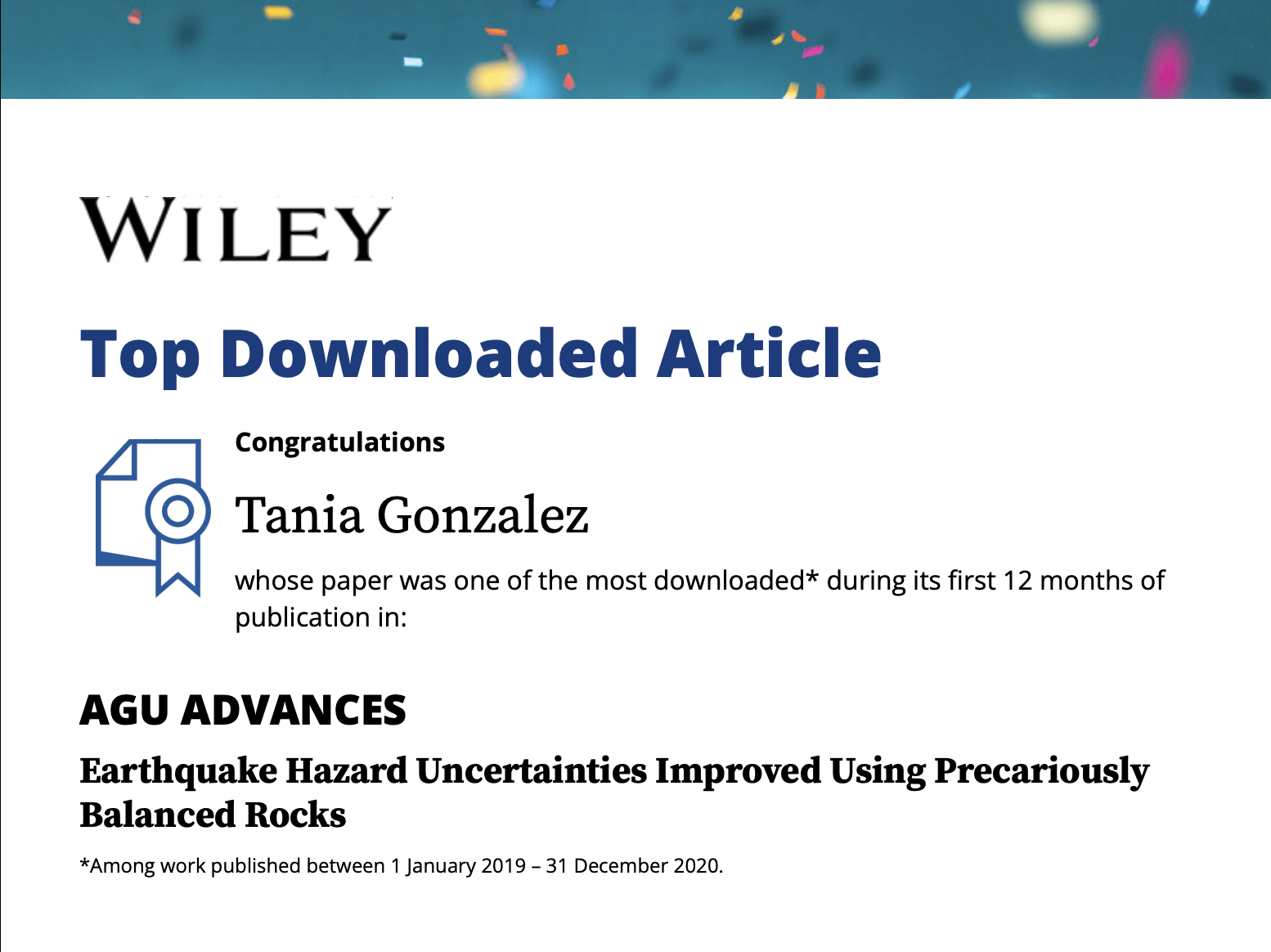 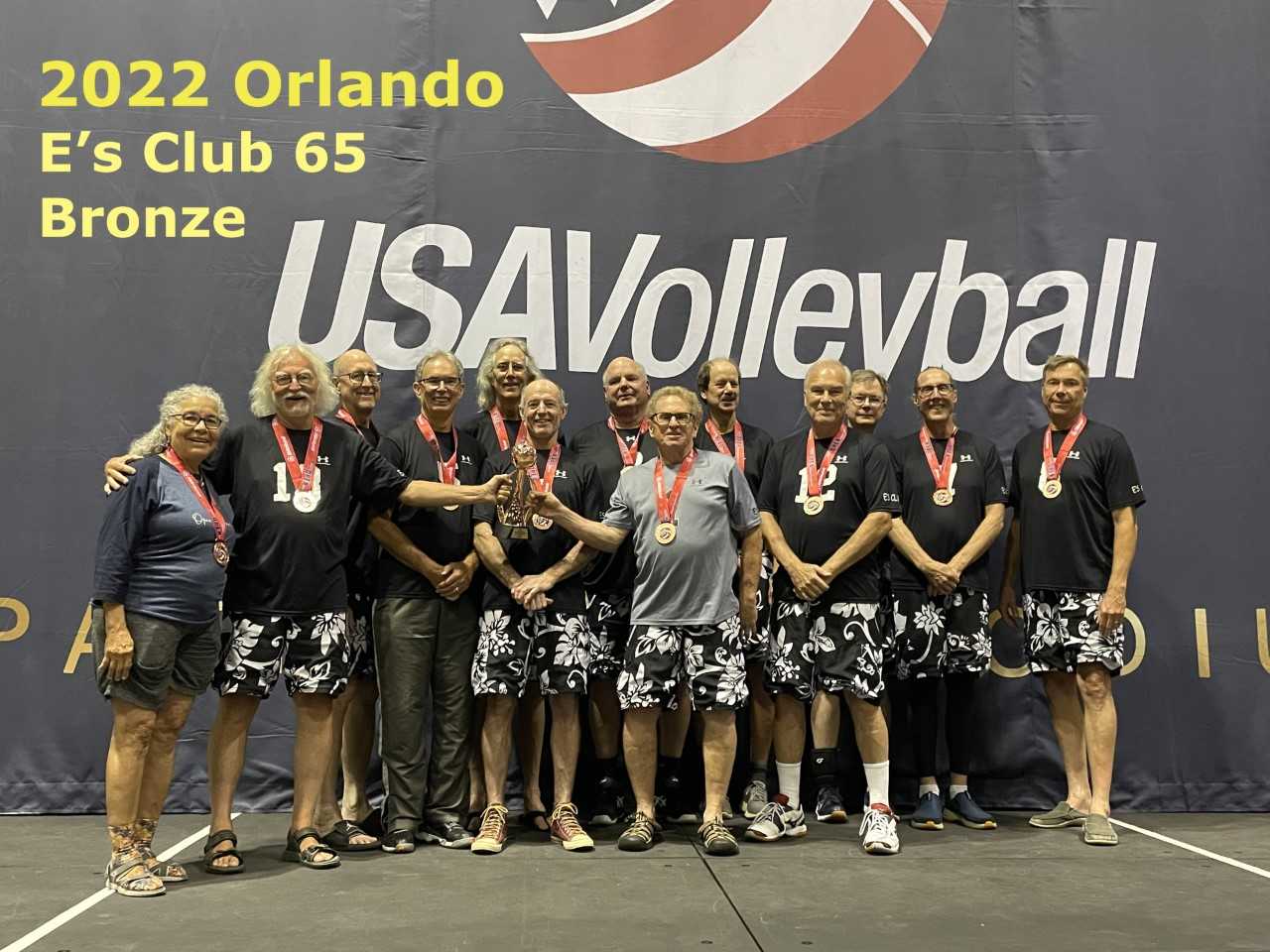 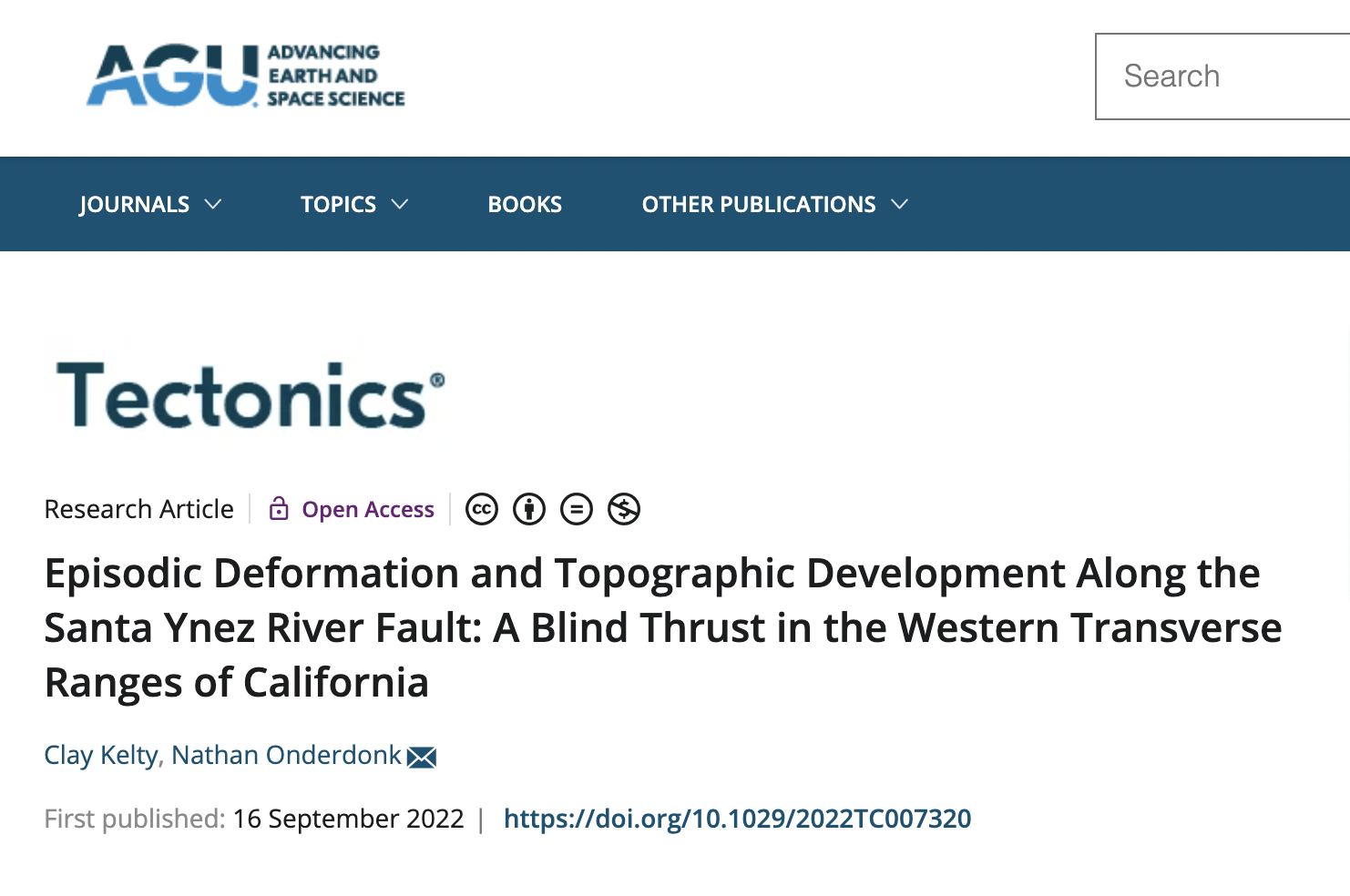 “Turning Hills into Mountains: How the collision of the Santa Ana Mountains and the Puente Hills dominate Orange County’s seismic hazard!”. Eldon Gath compressed 40 years of remembering everything and anything on Orange County geomorphology, tectonics, paleogeography, paleoseismology, engineering geology, structural geology, sedimentology, geochemistry, and even anthropogenic history, into a 65 minute talk (+ Q&A) and presented to the geology community of Orange County on Monday August 3rd, 2020 via Zoom. This talk pulls from two MS and two PhD attempts, now if he could only write it up. Click the play button to watch Eldon’s talk now and learn more about the fascinating geologic history of Orange County.

ECI Vice-President Tania Gonzalez has contributed to an AGU publication discussing how constraints on seismic shaking for the geological past at a site in central California can be used to improve earthquake hazard estimates for the future. Read the paper by clicking the link below: 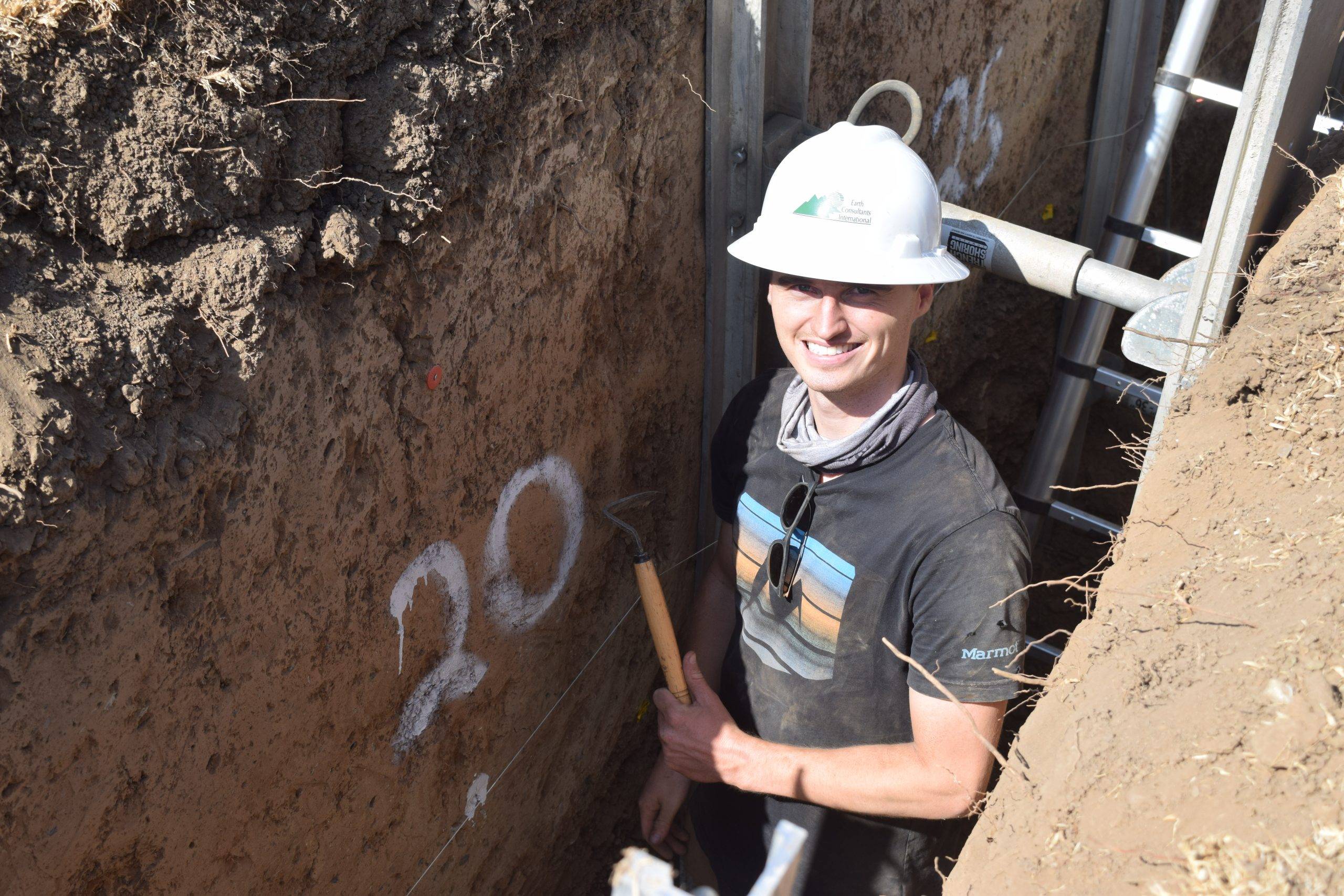 Clay Kelty has been working with ECI staff geologists on several field projects and has proven to be a valuable member to the team. Clay just finished an MS in Geology at California State University in Long Beach. His research focuses on fluvial terraces of the lower Santa Ynez river in California as markers to measure regional uplift, recency of faulting along the Santa Ynez River fault, and terrace formation at the fluvial/coastal interface.

Written by Administrator (May 2021)

“The modern era of Paleoseismology arguably began 50 years ago, shortly after the 1971 San Fernando, California earthquake (M6.6). This was the nation’s most damaging urban earthquake since the 1933 Long Beach earthquake (M6.4), and the first to occur after active fault studies for nuclear power plants had begun in the mid-1960s (e.g. Schlocker et al., 1963).” 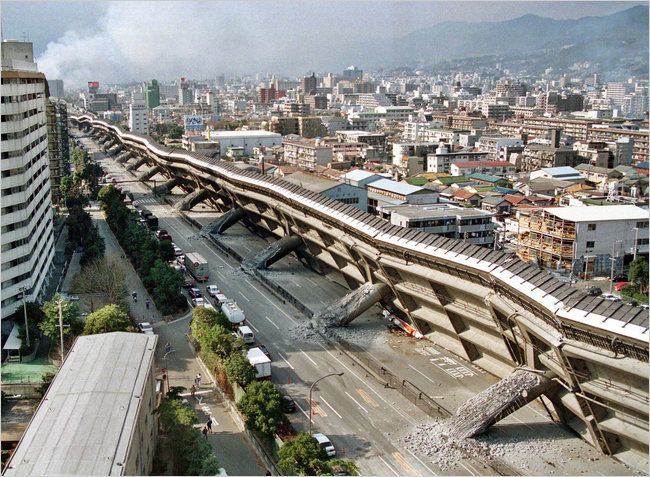 The Hokudan 2020 International Symposium on Active Faulting will take place from January 13-17 in Awaji City, Japan. The symposium is held every 5 years. The 2020 event commemorates the 25th anniversary of the 1995 Kobe earthquake. All important information on this meeting is available here: 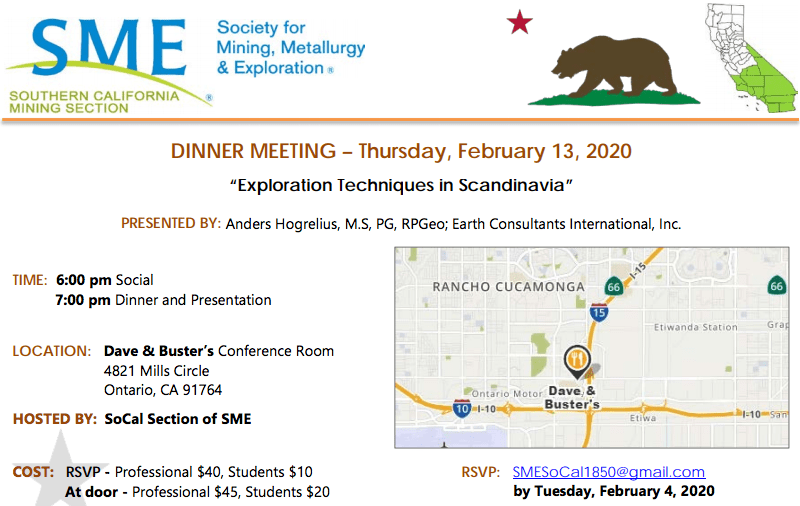 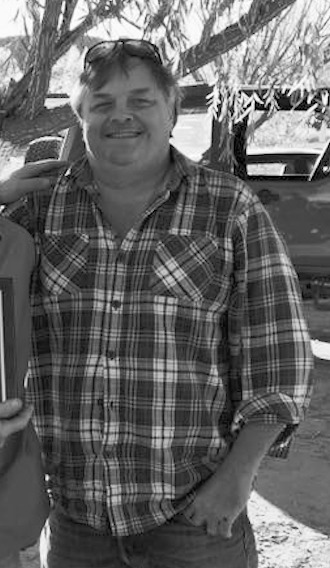 We have lost a dear friend, an excellent geologist, and a valued colleague. Eric Hendrix passed on October 10, 2019 after a lifelong battle with diabetes and kidney disease. He received an MS in Geology from UCLA and was a California-licensed Professional Geologist. Eric was a Principal Hydrogeologist with ECI, head of our Groundwater / Environmental group. His warm-hearted personality was always forefront, and we all enjoyed interacting and working with him. Throughout his professional career Eric also remained involved with the academic research community and contributed heavily to the geologic profession through publication of technical papers, his engagement with the Pacific Section SEPM, or his knowledge transfer support to students. Besides his 25 years of hydrogeologic experience, he held a tremendous knowledge of the sedimentology, structural geology, and neotectonics of southern California. Eric will be missed at ECI and within the geology community. 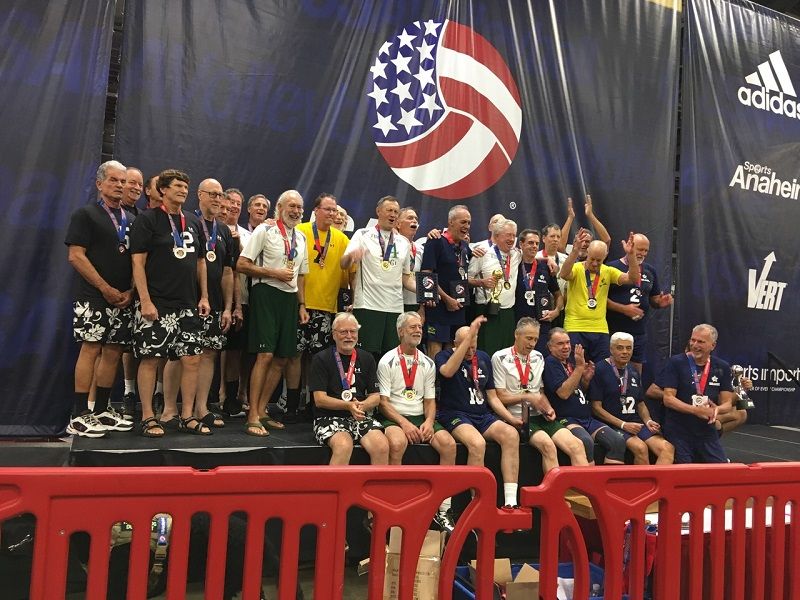 Eldon’s volleyball team (Eldon’s Club, left side of photo with the coolest shorts) took the Bronze medal in the 65+ division at the 2019 USA Volleyball Open championships in Columbus Ohio, losing to Brazil who took the Silver, and King’s Mountain Fog who won the Gold. Eldon’s 60+ team also took the Bronze at the same tournament. 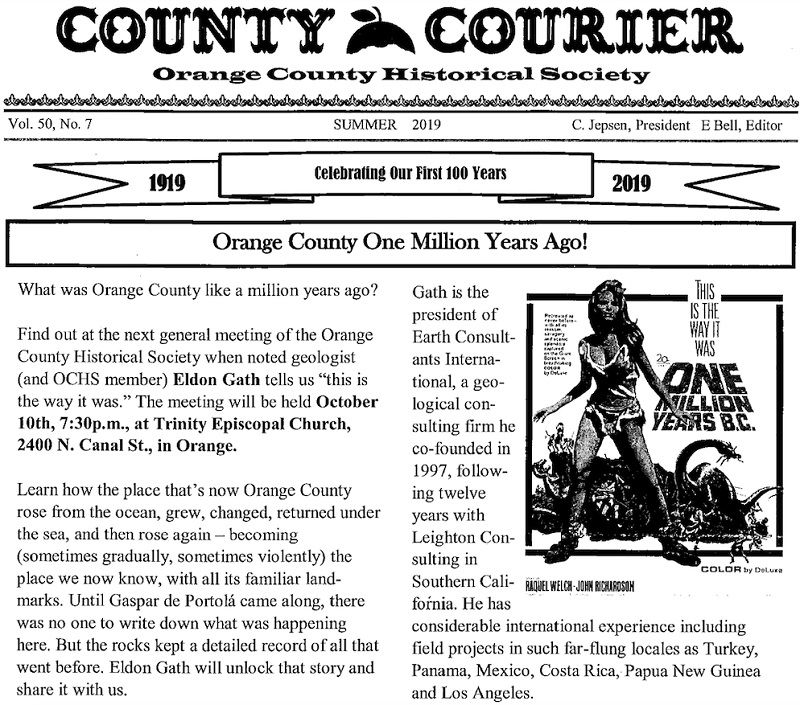 Eldon Gath is invited for a dinner talk by the OC Historical Society. Eldon will give insight on the question: “What was Orange County like a million years ago?”. The meeting will be held October 10th, 7:30pm in Orange. 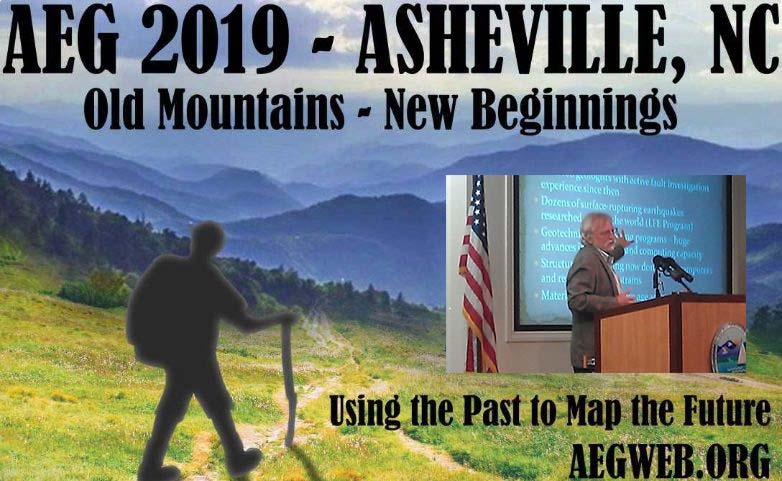 ECI President and current IAEG President Eldon Gath will be representing Earth Consultants International in Asheville. Eldon will talk about the Pleistocene tectonic evolution of Orange County, California on September 21st. See you in Asheville! 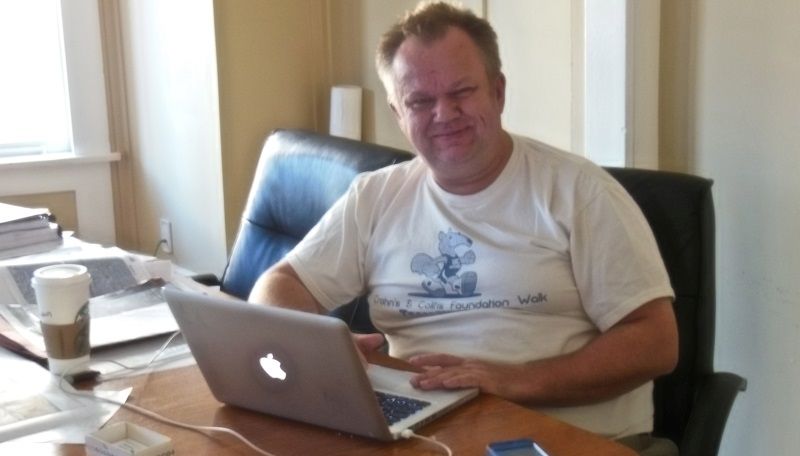 Anders Hogrelius, Senior Geologist and specialist for IT development at Earth Consultants International passed the examinations for the California Professional Geologist. Anders expands his licensure in geology after becoming a Registered Professional Geoscientist (RPGeo) through the Australian Institute of Geoscientists program. Congratulations, Anders!

ECI Project Geologist Yannick Wirtz will attend the 16th international conference of the Brazilian Geophysical Society in Rio de Janeiro. Yannick presents on the importance of surface geological observations for creating structural models of the subsurface.

See you in Rio!

Written by Administrator (May 2019) 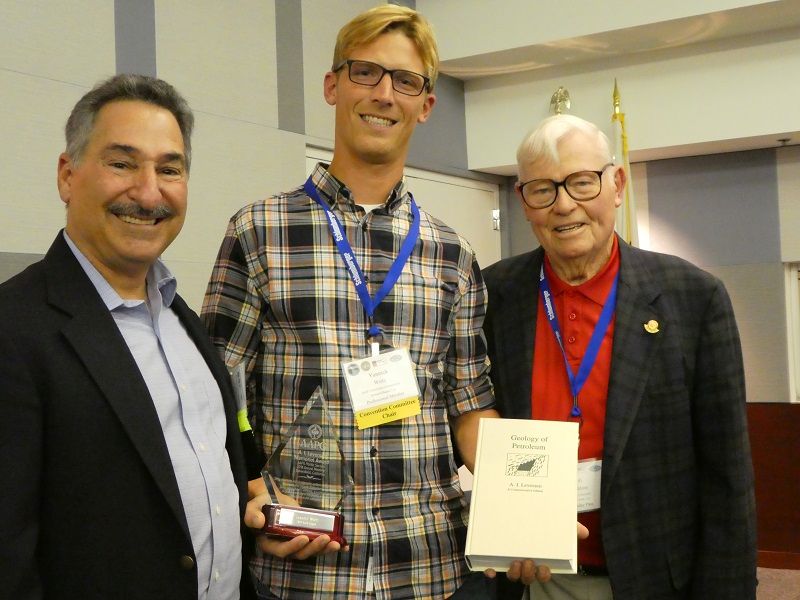 Yannick Wirtz (center) receives the A. I. Levorsen Memorial Award for his presentation at the PSAAPG conference in Bakersfield presented by PSAAPG president Rick Behl (left) and award chair Bob Lindblom (right). The award recognizes the best paper presented at each AAPG Section meeting, with particular emphasis on creative thinking toward new ideas in exploration. 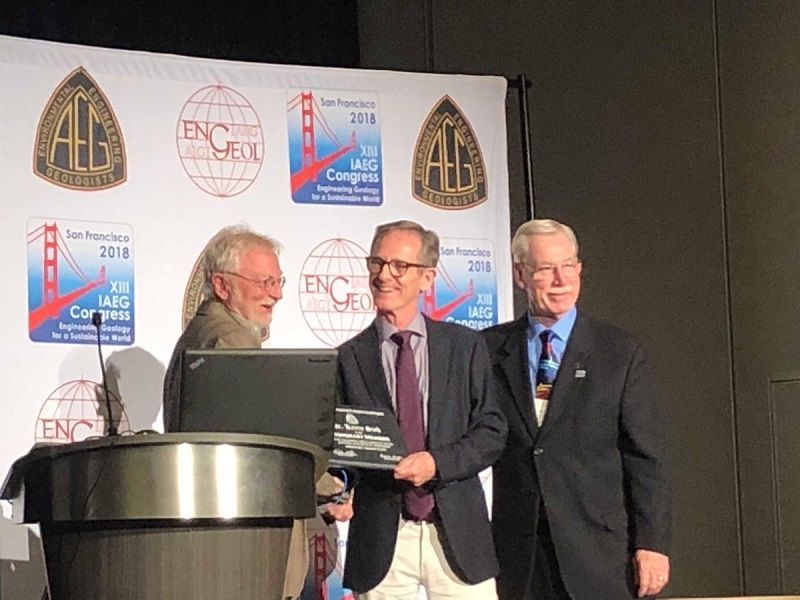 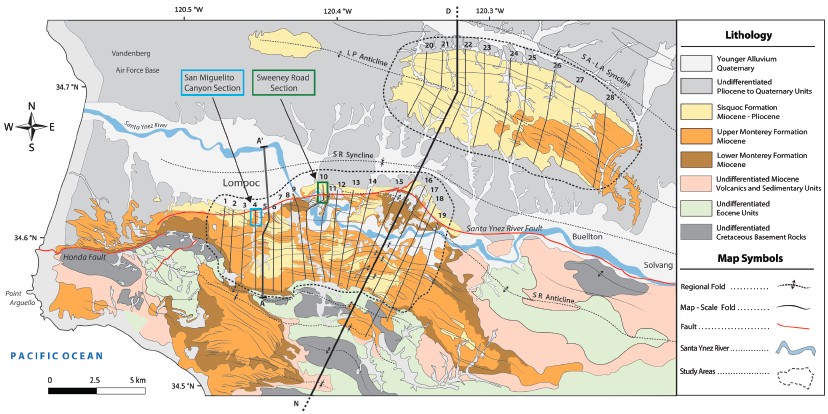 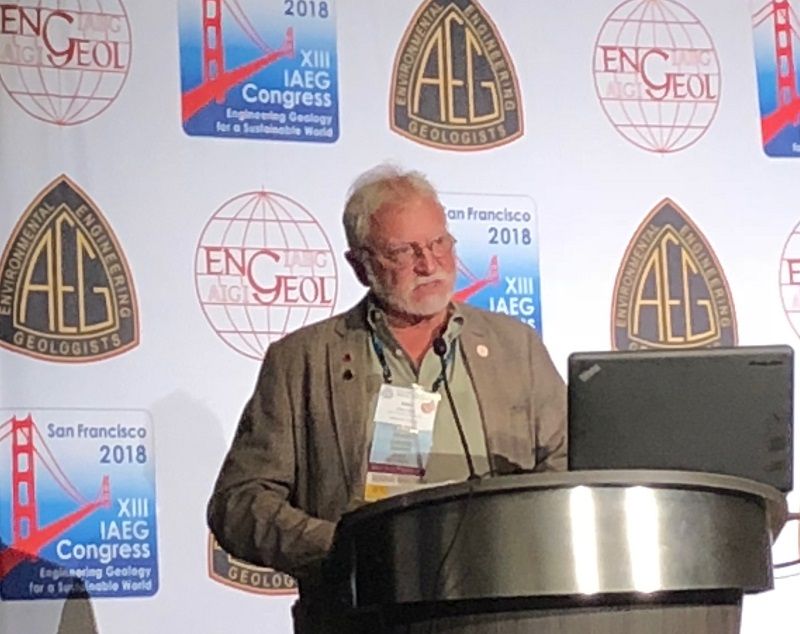 Tectonic Geomorphology, Late Quaternary Slip Rate, and Paleoseismology of the Whittier Fault in Southern California by Eldon Gath, Tania Gonzalez and Tom Rockwell will be presented by Eldon Gath on September 21st. See you in San Francisco! 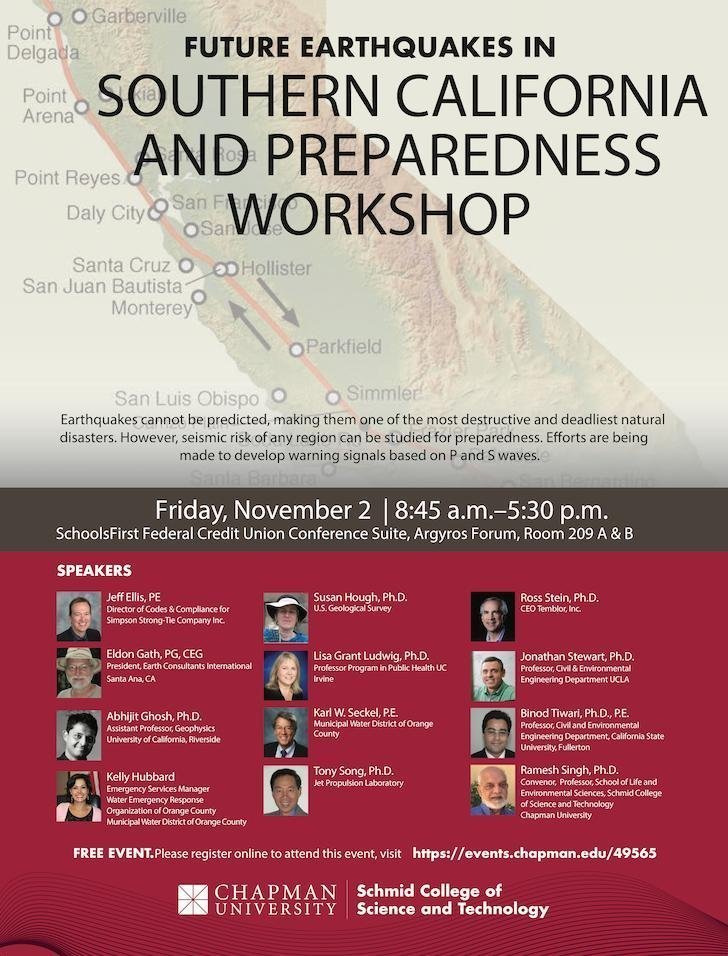 ECI President Eldon Gath will be presenting his talk: Turning Hills into Mountains: How the collision of the Santa Ana Mountains and the Puente Hills dominate OC’s seismic hazard. See you at Chapman University! 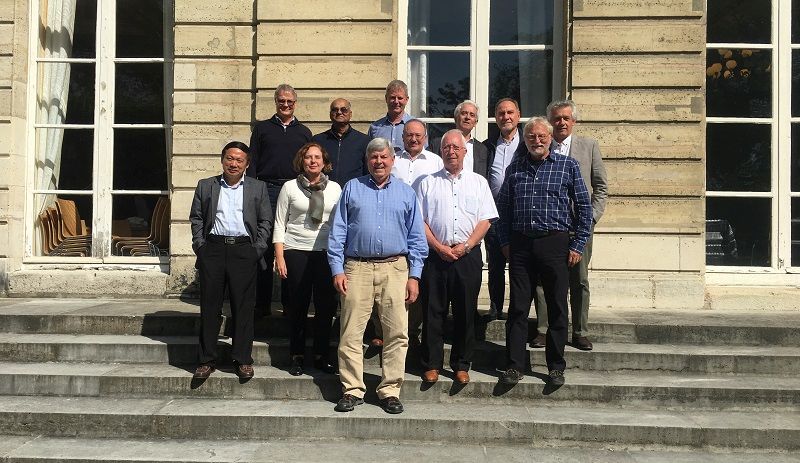 Written by Administrator (May 2018)

Should we ignore the hazard posed by the fault? Are we geo-professionals too enamored of the financial gains such regulatory zoning provides that we are unwilling to suggest changes? Could we move past the “one size fits all” zoning that requires that single-family homes are held to the same standard as 40-story buildings?

How Can We Put More
Reality Into Fault Zoning 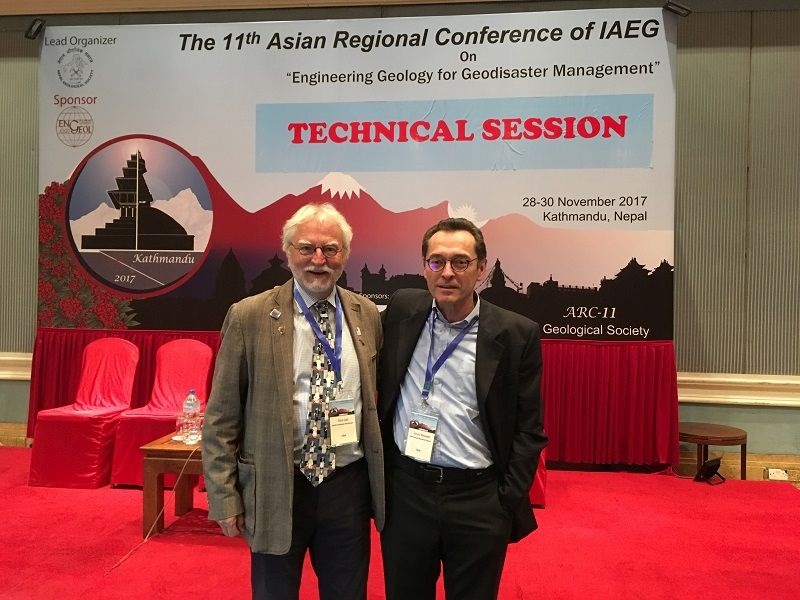 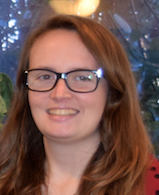 ECI Staff Geologist Taylor Bogdanovich serves as treasurer for the South Coast Geological Society (SCGS) of Orange County. ECI has been a long term sponsor and its employees remain active. In previous years Maria Herzberg and Eldon Gath have served as President to SCGS.
Thank you, Taylor! 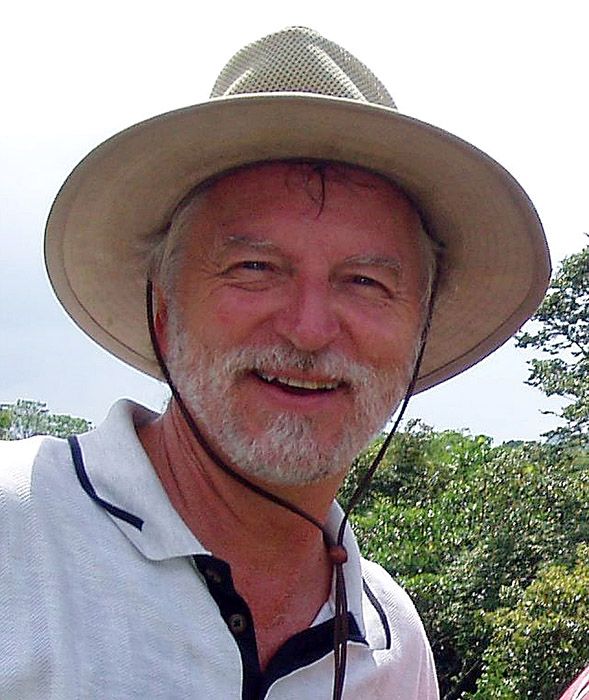 ECI President Mr. Eldon Gath has been named the 2014-2015 Richard H. Jahns Distinguished Lecturer in Applied Geology. The lectureship is awarded jointly by the Environmental and Engineering Geology Division (EEGD) of the Geological Society of America and the Association of Environmental and Engineering Geologists. The purpose of the lectureship is to promote student awareness of Applied Geology. Click here for more information. 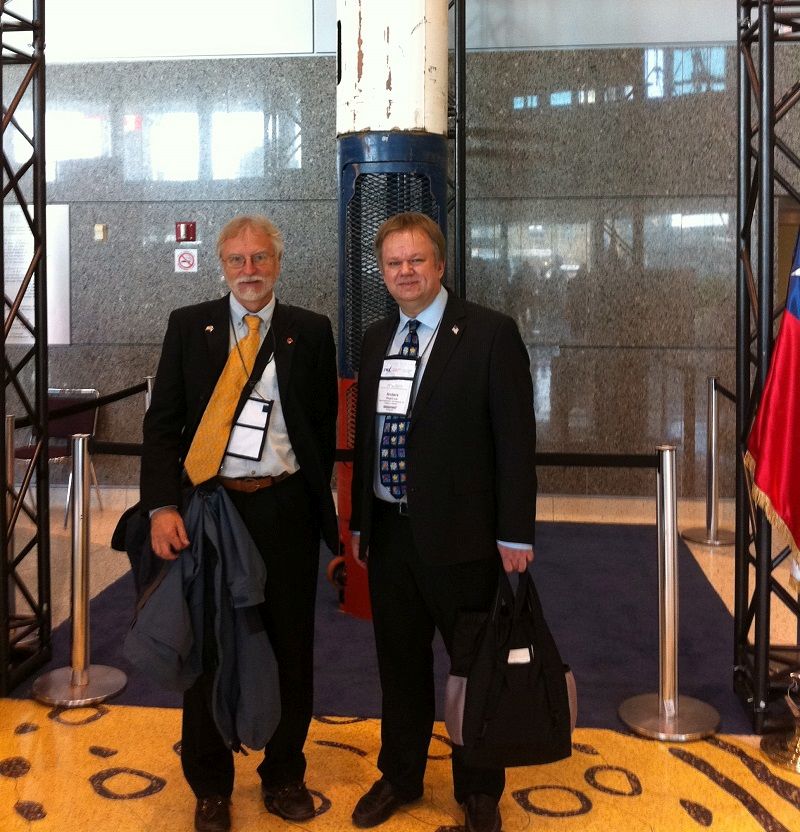 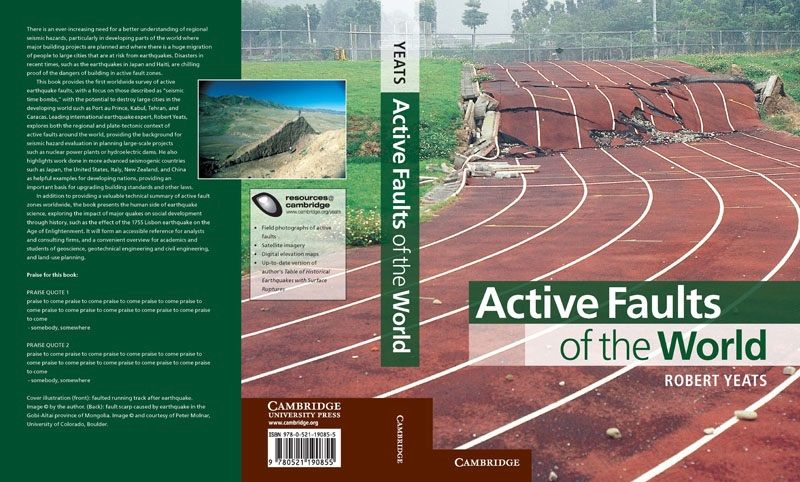 There is an ever-increasing need for a better understanding of regional seismic hazards, particularly in developing parts of the world where major building projects are planned and where there is a huge migration of people to large cities that are at risk from earthquakes. Disasters in recent times, such as the earthquakes in Japan and Haiti, are chilling proof of the dangers of building in active fault zones. This book provides the first worldwide survey of active earthquake faults, with a focus on those described as “seismic time bombs,” with the potential to destroy large cities in the developing world such as Port au Prince, Kabul, Tehran, and Caracas. Leading international earthquake expert, Robert Yeats, explores both the regional and plate-tectonic context of active faults around the world, providing the background for the seismic hazard valuation in planning large-scale projects such as nuclear power plants or hydroelectric dams. He also highlights work done in more advanced seismogenic countries such as Japan, the United States, Italy, New Zealand, and China as helpful examples for developing nations, providing an important basis for upgrading building standards and other laws. In addition to providing a valuable technical summary of active fault zones worldwide, the book presents the human side of earthquake science, exploring the impact of major quakes on social development through history, such as the effect of the 1755 Lisbon earthquake on the Age of Enlightenment. It will form an accessible reference for analysts and consulting firms, and a convenient overview for academics and students of geoscience, geotechnical engineering and civil engineering, and land-use planning. 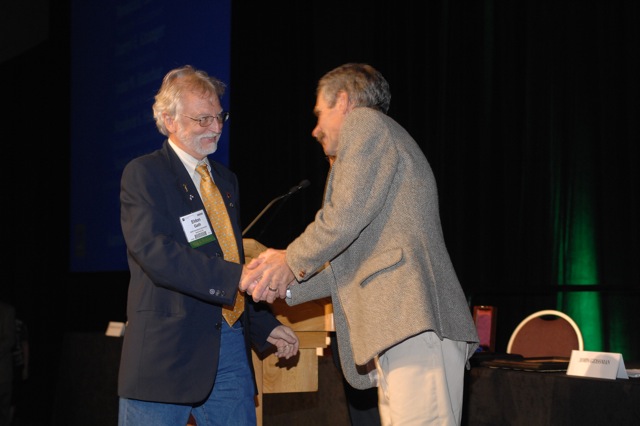 Eldon Gath received a Fellowship Membership Award from the Geological Society of America in recognition for his distinguished contributions to the geosciences.

The award was presented to Eldon by GSA President John Geissman at the 2011 Annual Meeting in Minneapolis, MN, this past October 2011. 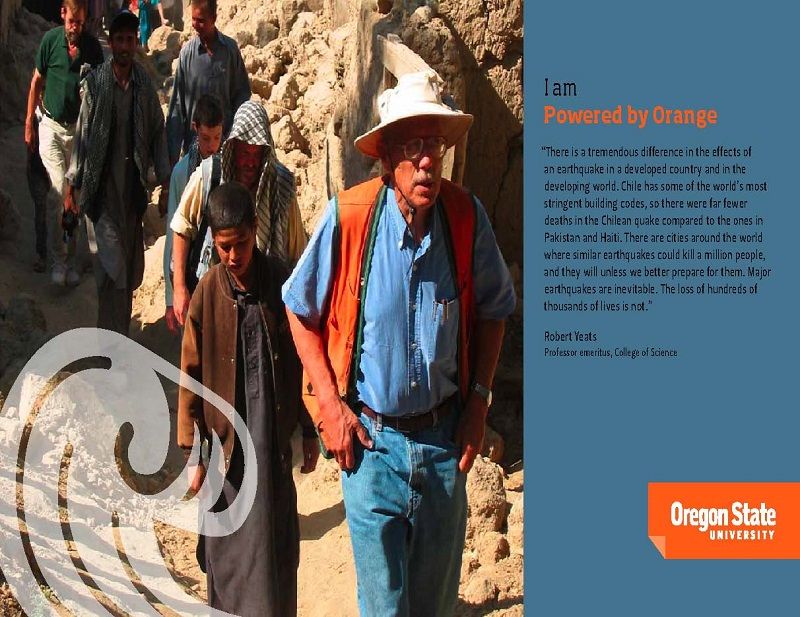 Robert Yeats (ECI Partner) was honored by Oregon State University (Emeritus Professor) for his community service, both locally and internationally. The “Powered by Orange” campaign selected Bob to grace their poster, using a photo taken of him by Christopher Madden (ECI Partner) during their 2002 review of earthquake effects in northeastern Afghanistan. The project was funded by USAID to provide a current damage and future vulnerability assessment, and recommendations for more stable building sites. Their review was published in Seismological Research Letters in 2003.